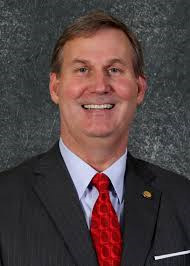 Something caught my eye last week: namely, an unintentionally hilarious moral lecture from the John Burkhalter for Lieutenant Governor campaign. Burkhalter’s campaign teed off on an idiotic comment made by a GOP activist, Johnny Rhoda, claiming that Hillary Clinton would “probably get shot” if she campaigned in Arkansas.

Here’s Burkhalter’s statement:
John Burkhalter knows Arkansans – regardless of political party- abhor violence in our politics and our communities. Those are the Arkansas values we all share.

Dangerous and violence-inciting language may work in Washington. But Mr. Rhoda’s divisive and threatening words have no place in Arkansas. Congressman Griffin may be used to these tactics but we call on him to immediately denounce the statement, and relieve Mr. Rhoda from any official role in his campaign, and issue an unequivocal apology,” said Mariah Hatta with the John Burkhalter for Lieutenant Governor campaign.

I’m glad to hear that Burkhalter is now above “dangerous and violence-inciting language. People paying attention will remember the headlines Burkhalter made just a few short months ago for some dangerous and violence-inciting actions of his own — according to past media reports of a lawsuit between him and his former business partner, Kent Vestal.
From Talk Business in March:
The hearing today involved an appeal of claims and counterclaims between Burkhalter and a business partner, Kent Vestal.  In the original trial,the jury ruled in Vestal’s favor on four charges totaling $178,000 in damages.  One of the charges they ruled [on] in Vestal’s favor was … “Invasion of Privacy by Intrusion into Seclusion.”  What does that mean? From the original complaint filed by Vestal…

It looks like the jury decided that Burkhalter did something like this: he arrived at Vestal’s office, accompanied by several of his associates, and ordered one of them to drill the lock off the door of Vestal’s private office. Burkhalter and his retinue then rifled through Vestal’s private business documents, opened personal mail, including personal bank and brokerage statements of Mr. Vestal and his family members, opening and reading files of Mr. Vestal’s law clients, attempting both to hack into Vestal’s computer and get into his safe. The jury awarded damages to Mr. Vestal for Mr. Burkhalter’s invasion of privacy and intrusion upon seclusion.
Vestal’s suit alleged that Burkhalter and his pals even mishandled some of Vestal’s guns after they broke into his locked office:

The only time (an employee) felt uncomfortable around the guns was during the day Burkhalter broke into Vestal’s office, when Burkhalter’s entourage recklessly handled the guns. They banged them on furniture and pointed the weapons at (the employee who) was pregnant at the time.

The relevant testimony presented at trial — testimony about Burkhalter’s entourage brandishing guns, banging guns on furniture, and even pointing a gun at a pregnant employee — was uncontested.
And now Burkhalter is lecturing his opponent, Griffin, about “dangerous and violence-inciting rhetoric.” It’s a crazy world we live in. Perhaps the gun-brandishing entourage that Burkhalter travels with would find this lecture convincing.
You know what’s worse than “dangerous and violence-inciting language”? Actions like breaking into offices, rifling through private papers, and pointing guns at people. It is fair to point out that such actions are worse than any rhetoric: to coin a phrase, those actions are inherently dangerous and therefore could easily incite violence.

One thought on “Free Campaign Advice for John Burkhalter”