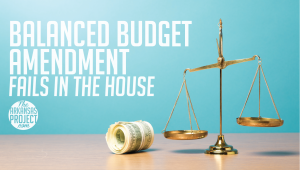 Should the U.S. Constitution mandate that the federal budget be balanced? The Arkansas members of the House of Representatives think so. They all voted in favor of the Balanced Budget Amendment. Even though a majority of the House of Representatives voted to send this amendment to the states for ratification, it failed to gain the necessary 2/3 majority. This is another in a long line of setbacks to add this amendment to the Constitution.

The Balanced Budget Amendment would do the following:

These restrictions can be waived if there is a declaration of war or a military conflict that causes imminent threat to national security.

It occurred after the same House has been recklessly adding debt through tax cuts and spending increases. Legislation passed since June will increase deficits over the next decade by $2.7 trillion, according to the Congressional Budget Office and the nonpartisan Committee for a Responsible Federal Budget. Because of that legislation and previous decisions, Uncle Sam next year will spend $1 trillion more than it collects. For perspective, that’s more than $3,000 in new debt for every American man, woman and child. And that’s on top of the $21 trillion in debt that already exists, plus the trillions more that were going to be added without these latest votes.

In other words, House Republicans voted for an amendment to balance the budget that they knew wouldn’t pass after voting for budget-busting bills they knew would. While many may have actually supported the amendment, the vote also allows them to proclaim during an election year that they’re trying to balance budgets without having to actually do so.

Brawner makes some good points. If you proclaim that you want a balanced budget, then why vote for policies that increase the deficit even further? As I mentioned on TAP previously, only Rep. Westerman has opposed reckless spending this year. It is difficult to see how the other members of the delegation can be taken seriously when they vote for a balanced budget amendment but do nothing in practice to help achieve a balanced budget.

But this isn’t the full picture. There is a good argument to be made that that changing the structure of the way Congress spends money will do more good than simply counting on individual members of Congress to be more responsible. Politicians are always tempted to do the thing that is popular in the short-run (in this case, more spending or tax cuts without offsets) rather than doing the thing that is right in the long-run. If the structure of the spending process makes it easier to prioritize long-run fiscal responsibility over short-run popularity, then it is more likely that members of Congress will be fiscally responsible. That is why tax limitation amendments or spending limitation amendments are generally good things in state constitutions.

This is akin a compulsive gambler grappling with how to stop that problem from ruining him.

In many places, such a person can put himself on a list that bars him from entering a casino. One could say that a simpler solution would be for that person to stop going to the casinos if he recognizes his gambling is destructive. True enough, but if someone has a compulsion, that may be difficult. The person who realizes that he cannot resist the short-term pleasure that comes from gambling, but that such a habit is bad for his long-term financial health, can change the rules so he cannot gamble in casinos. This helps stop his compulsion from being so destructive.

This is a pretty good analogy for many members of Congress – they are compulsive spenders who recognize they have a problem. While it may be better for them to stop their spending addiction cold turkey, many cannot. So it may be the next-best thing for them to impose institutional safeguards that will help them control their costly impulses. The Balanced Budget Amendment could do that. Unfortunately, this good idea to change the U.S. Constitution won’t be happening any time soon.