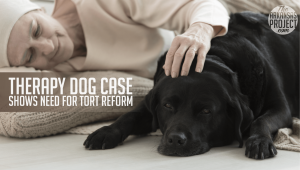 Taking sex offenders off the streets really ought to be squarely in the realm of public policy discussion in Arkansas. There is certainly a compelling state interest to find ways to stop sex crimes against children. Unfortunately, those who run the state’s judicial system do not appear to agree. A recent case involving therapy dogs for minors who testify in sex crime cases illustrates why the Arkansas judiciary needs some checks-and-balances when it comes to judicial procedure.

Here is how the Democrat-Gazette describes the case, as decided by Pulaski County Circuit Judge Wendell Griffen:

Arkansas legislators exceeded their authority when they enacted the Courthouse Dogs Child Witness Support Act, the judge determined. The law allows child victims to testify in court with a specially trained dog to comfort them.

The problem Griffen found with Act 957 of 2015 is not about the dog. The judge ruled that the law violates the Arkansas Constitution’s separation of powers clause by usurping the judiciary’s authority over courtroom procedure and operations…
Lawmakers have the power to define rights and duties by enacting laws, but they do not have the authority to command how the courts enforce those rights and duties, according to the judge’s three-page decision.

When they enacted the Courthouse Dogs Child Witness Support Act, legislators determined that children might be more willing to testify against accused predators if they had a therapy dog around to make them more comfortable. If kids are more willing to testify, presumably that would result in fewer sex criminals going free. That is an issue of public policy. And yet, a presiding judge determined that this question was a question of judicial procedure and operation. By barring these dogs from the courtroom, the state’s judiciary is frustrating a legitimate public policy goal.

This is something that we’ve explored previously on TAP. The courts are aggressively interpreting their authority under Amendment 80 to infringe upon legislators’ ability to make laws that affect public policy. In these cases, it is the courts, not legislators, who are determining public policy.

It is not a violation of separation of powers to allow the legislature to pass laws that affect the judiciary’s procedure. This is power that the legislature held for most of the state’s history. If the judiciary retains exclusive control of this power, we will continue to have the courts determining issues of public policy.
SJR 8 would give a supermajority of legislators the power to rectify this imbalance. It would restore a system of checks-and-balances for the judiciary. The therapy dog case is a perfect illustration of why reform in this area is long overdue.