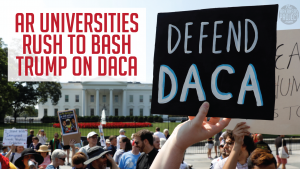 I get nostalgic for college campus life as summer ends and fall begins.

Parties, football games, and new subjects to learn are all things I remember being excited about at the beginning of every school year.

Unfortunately, there are also things I don’t miss about school — like the self-righteousness of some university administrators and faculty when it comes to proselytizing with political opinions instead of educating students.

An example of this unfortunate habit occurred earlier this month with the announcement of President Donald Trump’s rescinding of the Obama-era executive action called Deferred Action for Childhood Arrivals (DACA).

DACA in theory protects illegal immigrants from deportation who arrived in this country as children.

Trump pledged to rescind this executive action as a candidate. He now says he might approve granting the DACA population legal status if a bill doing so goes through the appropriate legislative process. He also wants increased border security and a legislatively established end to chain migration in exchange for his support for DACA.

I suspect Trump’s action on DACA earlier this month would be met with solid levels of support if Arkansas voters were polled. Trump won 60 percent of Arkansas voters in the 2016 election, and his position on immigration issues was one of the issues he was fairly consistent on throughout the Presidential campaign.

One of the few places Trump’s decision hasn’t been met with approval in Arkansas is the taxpayer-funded halls of our universities.

University of Arkansas Chancellor Joseph Steinmetz said DACA students don’t “take anything away from any other student” and that “their presence enriches our community.” Arkansas State University Chancellor Kelly Damphousse said he was saddened to see how this “policy shift dramatically affects the lives of these students.” University of Central Arkansas’s (UCA) Houston Davis cited a Cato Institute report showing rescinding DACA would lead to lower economic growth over the next decade. (We encourage Davis to take a look at Cato’s research on other topics, such as federal student loan privatization.)
Reasonable people can disagree on this issue. For example, President Obama used to think a unilateral DACA-like program was unconstitutional before he later decided it was constitutional.

It’s also important to note that this issue shouldn’t be a terribly pressing one for state universities in Arkansas. For example, the University of Arkansas at Fayetteville and UCA have a grand total of 38 DACA recipients between them.

These kinds of statements by university leaders make for nice headlines in the media, but lobbying for political causes is hardly the central mission of taxpayer-funded institutions of higher education. Universities should stick to educating students, instead of trying to preach their favored brand of progressivism to the public.

(We’ll have more next week on the interesting faculty debate on this topic at the University of Arkansas at Little Rock.)