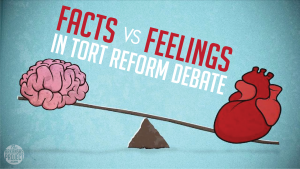 The Arkansas Tea Party Alliance held their annual meeting in Little Rock over the weekend.

Attendees got to see a debate on tort reform between Advance Arkansas Institute President Dan Greenberg and Joey McCutchen, a Fort Smith-based personal injury lawyer and head of the Arkansas Trial Lawyers Association.

Greenberg spoke in favor of SJR 8, a tort reform measure on the ballot before voters in 2018. McCutchen spoke against it.

Greenberg began the debate by asking attendees to not give too much weight to arguments against tort reform that are based on anecdotes and appeals to emotion.

I think that emotional examples are very powerful, but please don’t make a snap decision that’s not based on the welfare of everyone in Arkansas. We all know that every change in the law creates winners and losers. The reason we have a Constitution is to advance the general welfare of the people.

Greenberg said Arkansas voters should look at Texas as a good example of a state that passed tort reform 15 years ago and is now reaping the benefits.

The number of doctors in the state of Texas nearly doubled [in the decade after tort reform’s passage]. Think about that kind of growth in availability in medical services. In that period, rates for malpractice insurance in Texas dropped by half. In the same period, in New York State, malpractice costs increased by 50 percent. In fact, they increased so much that the New York legislature decided that it was going to have to subsidize doctors in their malpractice insurance the same way they subsidize farmers. There are lots of studies that show damage reforms and tort reform makes health care expenditures drop and makes health care insurance premiums drop.

Arkansas is currently 46th in the nation when it comes to the amount of active physicians per 100,000 population.

McCutchen began his talk by ignoring Greenberg’s advice about appeals to emotion and began reeling off recent deaths from negligence, such as a 5 year old boy left in a hot car by West Memphis daycare workers, and said SJR 8 would put an “arbitrary value” on such lives.

…
SJR 8 would put an arbitrary, fixed, pre-determined price tag on the value of human life of $500,000. $500,000 for every Arkansan in every type of situation without a local jury listening to the facts, the evidence and the wrongful conduct…and making a decision.

McCutchen continued by noting the opposition to SJR 8 from pro-life leaders such as Arkansas Right to Life’s Rose Mimms and the Family Council’s Jerry Cox while ignoring the fact that many of the legislative sponsors of the bill to get SJR 8 on the ballot have some of the most pro-life voting records in the legislature.

It is fair to say that McCutchen’s statement about placing a price tag on the value of human life is vastly overstated. As Greenberg brought out later in the debate, under SJR 8 bad conduct allows juries to multiply the damage figure that McCutchen used, and really bad conduct allows juries to multiply that damage figure without any limit.
All in all, this debate was really just a microcosm of what to expect until the issue gets voted on next year — when we will see if facts or feelings will win the day on the tort reform debate.

4 thoughts on “Facts vs. Feelings In Tort Reform Debate”