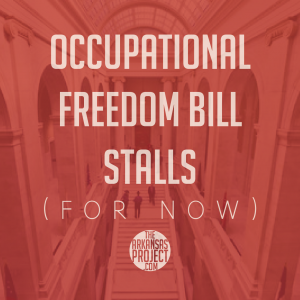 State Rep. Richard Womack’s bill to provide Arkansans with much-needed relief from burdensome occupational regulations failed on a voice vote in the House Public Health, Welfare, and Safety committee Thursday morning.
After the hearing, Womack said he was disappointed that his bill failed to pass, but added that he was optimistic it would pass at a later date when more of the committee’s members were present.
HB 1158 would allow Arkansans to challenge occupational regulations that are demonstrably burdensome and that make it significantly more difficult to work.
From the bill’s language (as amended):

A person who asserts a defense under this section has the initial burden of proving that an occupational regulation is a substantial burden on the person’s right to engage in a lawful occupation. If a person meets the burden of proof under subdivision of this section, the government shall demonstrate by clear and convincing evidence that: It has an important interest in protecting against present and recognizable harm to the public health or safety; and The occupational regulation is the least restrictive means of furthering the important governmental interest.

One of the more curious objections brought up by several Democrats on the committee was that the bill would bring on a rash of frivolous lawsuits in the state of Arkansas.
From State Rep. Fred Love:

(I’m pretty sure the term Love was looking for was “frivolous.” Fictitious lawsuits only exist in Law & Order reruns and John Grisham novels, and they come at no added cost to the taxpayer.)
Frivolous lawsuits, as Womack said at the hearing, shouldn’t be caused by this bill, because the only reward for a successful court challenge of an occupational regulation is the right to perform a job free of unreasonable regulations. The defendant wouldn’t receive any monetary damages from state taxpayers because of a successful challenge.
Furthermore, as a technical matter, the number of lawsuits that would be produced by this bill is zero. This bill only creates a defense to a regulatory enforcement action, so its real force is to make regulators pull back, check themselves, take a second look at their actions, and/or ensure that their regulatory enforcement remains inside reasonable boundaries.
However, it is good to hear that Democrats are concerned about frivolous lawsuits; no doubt they’ll be eager to support tort reform when it comes up for debate later in the session.
I’m pretty confident this isn’t the last we’ve heard of Womack’s bill. If passed into law, it would be a welcome improvement to the oppressive regulatory environment Arkansas workers currently must slog through.
From Womack at the committee meeting:

Right now Arkansas is the leader in the number of occupations it regulates. That’s like being a leader in debt or unemployment. You don’t want to be at the top of that list. (The bill) establishes in the law that people have a right to practice a legal occupation. When people who want to work are foiled by irrational regulations, this bill says you can have your day in court.

In other news: state Rep. Bob Ballinger’s hair braiding deregulation bill wasn’t brought before the committee as planned today, due to a delay caused by the amendment process. It will likely be brought up in Public Health next week.