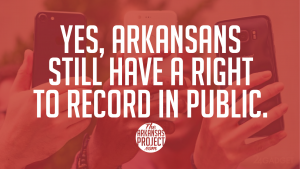 A recent ruling by the Eighth U.S. Circuit Court of Appeals has led some to question whether Arkansans still have the First Amendment right to record in public.

The answer to that question is: yes, despite what Max Brantley says.

Brantley claims that the ruling means “residents of Arkansas and the rest of the circuit lack the First Amendment right to report (record) on public activities of police afforded everyone else in the U.S.

”
While the anti-First Amendment ruling by the Eighth Circuit is concerning, it’s just not true that Arkansans are no longer legally able to photograph or film public officials. That’s because the Arkansas legislature had the foresight in 2015 to pass legislation sponsored by state Rep.

Richard Womack that established a statutory right to take photographs in public.

Indeed, Arkansas was the first state in the Union to pass such a law.

The Advance Arkansas Institute (AAI) assisted Womack in writing the legislation; we had advocated for that policy for some years.

Here’s how Dan Greenberg, president of AAI, explained the legislation in 2015:

The bill simply protects the use of cameras, both in places that are open to the public as well as on private property where the camera user has a right to be. It also bars the deletion or destruction of information in such cameras, as well as the seizure of such cameras absent exigent circumstances. The bill’s protection does not extend to several named special circumstances; for instance, if the photography could reasonably be expected to lead to copyright infringement, it isn’t protected.

For more information, you can read Act 1063 for yourself here.

While the Eighth U.S. Circuit Court of Appeals doesn’t believe the right to record public officials is a First Amendment right, it’s clear that an overwhelming majority of legislators from the 90th General Assembly and Gov.

Asa Hutchinson do. And we appreciate the larger symbolic meaning of their decision to pass that law — namely, that it isn’t just the judiciary’s job to protect the rights of the people.

It’s incorrect to assume that the judiciary is the only branch of government that can protect people’s rights. The Arkansas legislature made the right to record in public a statutory right in 2015. It’s still a right all Arkansans have — despite what some liberal journalists say.