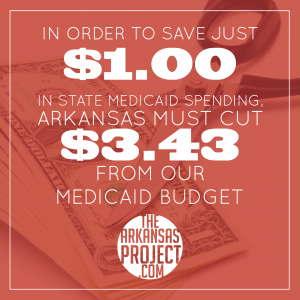 A new report from the Foundation of Government Accountability paints a dire fiscal picture for Arkansas taxpayers in the coming years.
The report, authored by Jonathan Ingram, reveals that Medicaid spending nationwide has “more than doubled” since 2000. Under Obamacare’s Medicaid expansion, Medicaid spending will continue to skyrocket and, at some point, states are going to be forced to deal with this fiscal storm. This will be a daunting task for states — particularly Arkansas — because of how Medicaid is financed.
According to Ingram’s findings, in order to save $1 of state budget funds, states will have to cut (on average) $2.32 of total Medicaid spending. In Arkansas, the fiscal pain will be even worse. Because our federal match is one of the highest in the country, we’ll have to cut $3.43 in total Medicaid spending to save just $1 in state tax dollars. Only three states have a higher burden:

Even worse, states that have expanded Medicaid — like Arkansas — will have a huge incentive to cut from the traditional Medicaid program first. That’s because the Medicaid expansion provides a higher match rate from the federal government than old Medicaid. In 2020, when the expansion match rate drops to 90%, expansion states (like Arkansas) will have to cut $10.00 in expansion spending in order to save $1.00. Arkansas lawmakers will have a choice between cutting $3.43 in traditional Medicaid — a program designed to serve the poor and truly needy — or cutting $10.00 in spending on an expansion program that serves mostly healthy, mostly childless adults. Given the fact that politicians have for centuries demonstrated an allergy to making significant budget cuts, it’s not hard to imagine where they’ll choose to trim.
This is simply the latest example of how Obamacare’s Medicaid expansion harms the truly needy. And that’s not just conjecture: able-bodied expansion enrollees are already moving to the front of the line in Arkansas. Under their Medicaid expansion, in 2010 Arizona:

eliminated Medicaid coverage for heart, liver, lung, pancreas and bone marrow transplants in order to pay for the growing costs of its Medicaid expansion.” As a result, truly vulnerable Medicaid patients in desperate need of life-saving organ transplants died so able-bodied adults with no disabilities keeping them from employment could keep receiving free, taxpayer-funded Medicaid coverage.

Oregon, Maine, and Rhode Island have also made cuts to traditional Medicaid in order to preserve their Medicaid expansions, as Ingram details in his paper.
According to latest reports from the state, Arkansas’s Medicaid expansion program is roughly $13 million over budget for the year. Arkansas’s entire Medicaid budget for this fiscal year is $5.3 billion. At some point, something has to give — this fiscal insanity can’t continue forever. And when it does, it’s the truly needy who will be on the chopping block.