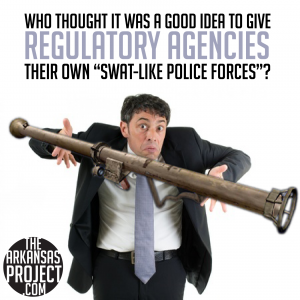 The statement that “Democracy means that if the doorbell rings in the early hours, it is likely to be the milkman” is often credited to Winston Churchill. In America in 2014, however, that doorbell is too likely to be rung by a federal bureaucrat leading a SWAT team to raid your property.
Of course, in a California case in 2011, the Department of Education’s SWAT team (yes, you read that right) wasn’t even courteous enough to knock:
From National Review:

The proliferation of paramilitary federal SWAT teams inevitably brings abuses that have nothing to do with either drugs or terrorism. Many of the raids they conduct are against harmless, often innocent, Americans who typically are accused of non-violent civil or administrative violations.
Take the case of Kenneth Wright of Stockton, Calif., who was “visited” by a SWAT team from the U.S. Department of Education in June 2011. Agents battered down the door of his home at 6 a.m., dragged him outside in his boxer shorts, and handcuffed him as they put his three children (ages 3, 7, and 11) in a police car for two hours while they searched his home. The raid was allegedly intended to uncover information on Wright’s estranged wife, Michelle, who hadn’t been living with him and was suspected of college financial-aid fraud.

Luckily, federal Congressman Chris Stewart (R-UT) introduced a bill in late June to do away with some of the nonsense that’s been going on with federal bureaucrats and their SWAT teams.
One of the co-sponsors is Congressman Tom Cotton (who, as you may know, is currently in the middle of a Senate race), who said yesterday on his website that the law enforcement powers of these federal agencies come from the 2002 Homeland Security Act.
Cotton said:

As a result, agencies like the Fish and Wildlife Service, the Food and Drug Administration, the Environmental Protection Agency, and even the Department of Education now have their own highly armed, swat-like police forces. And they’re using them—in 2010, armed officers from the FDA raided a California organic grocery store accused of selling raw milk and just a few months ago, the Department of Agriculture solicited submachine guns for its law enforcement units.
I am deeply concerned about this militarization of our federal agencies. The existence of highly armed units within such agencies is duplicative, costly, and can be hazardous to peaceful, law-abiding citizens. These types of law enforcement activities should be carried out by the Department of Justice, including the FBI, the U.S. Marshals, and the Drug Enforcement Agency. That is why I’ve sponsored the Regulatory Agency De-militarization Act (H.R. 4934), legislation that will repeal federal regulatory agencies’ arrest and firearm authority and prohibit them from purchasing weaponry regulated under the National Firearms Act, such as machine guns and grenades.

Here is the original press release from Stewart when the bill was introduced in late June. The bill is only four pages long, so even a congressman should be able to read and understand it if it ever comes to a vote.
A routine Google search for the Regulatory Agency De-Militarization Act shows just how little coverage the bill has gotten from the mainstream media. Outside of some local coverage in Utah in Stewart’s district, I can’t find any. I’m just a blogger, but I’d think reporters who have written thousands of sympathetic articles about why we need limits on the Second Amendment for private citizens might be able to spare some time for coverage of agencies like the Department of Education and its SWAT team.