The following is the third in a series of guest articles from Greg George, an Advocacy Coordinator with the Michigan Association of Public School Academies (MAPSA): 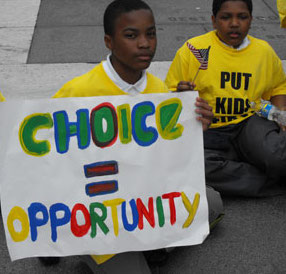 In my final blog post for National School Choice Week, I’d like to give you all a current snapshot of school choice in Arkansas.

School choice ultimately comes down to ‘parent power.’ The Center for Education Reform (CER) continuously monitors the status of educational choice across all 50 states via their “Parent Power Index.” The Parent Power Index is an interactive tool to discover how much parent power is available in any given state. It considers the following factors when ranking each state’s parent power:

Despite the fact that Arkansas is home to a former President who in 1992 supported public school choice through charter schools, Arkansas’s Parent Power Index ranking is 33 of 50, leaving Arkansas with plenty of room for reform and improvement.
Current Governor Mike Beebe is not an advocate for school choice reform and expansion. He opposes charter schools, school choice, and performance pay. Elections, as they say, do have consequences.

Arkansas also lacks what is known as a “parent trigger law” which provides a legal mechanism for parents to change the administration of a poorly performing public school—most notably, by transforming it into a charter school. California passed their parent trigger law in 2010. Subsequently, Louisiana, Mississippi, Connecticut, Texas, Indiana and Ohio followed their lead.

The state does permit parents some choice among traditional public schools allowing students to attend any public school in the state if there is room.

In addition, Arkansas’s charter school law allows only the state board of education and the state Department of Education to authorize charter schools. There are no independent authorizing options like there are in Michigan where state universities, community colleges, intermediate school districts, and local school districts can authorize a charter school. According to CER, “The requirement for approval by the local board makes it very difficult for charters to open and thrive. Other barriers to charter schools include the cap on the number of schools that can open (25), and the inequitable funding they receive.”

Arkansas is extremely limited in its digital learning offerings. According to Digital Learning Now, the state is given an “F” grade, scoring low in various categories including student eligibility, student access, and personalized learning.

According to the National Council on Teacher Quality, a new evaluation system will be implemented by the 2014-15 school year. It will require at least 50 percent of teacher evaluations to be based on student performance. Unfortunately, the evaluations will not be required annually except for certain circumstances (teachers on probation, etc.).

Through Arkansas.gov, parents can find school performance reports through a few clicks. Following several clicks through the website, I was able to find the Arkansas.gov charter school page. Not surprisingly, school board elections are not held on the same days as general elections and instead are held on the 3rd Tuesday of September each year.

Arkansas does have some work to do regarding expansion of school choice. The good news is that your state constitution enables you to have both tax credit programs and vouchers as school choice options. (Unlike Michigan, your constitution does not contain the Blaine Amendment, which prohibits Michiganders from having tax credits or voucher systems of choice.)

Parents and advocates are already organizing and demanding school choice expansion as is seen with the Facebook page: Arkansas Parents for School Choice.

It’s up to you to get involved. What’s better than giving children the opportunity to live out their own American dream in the greatest country on Earth?