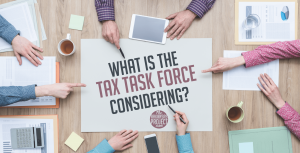 Arkansas taxes may be in for a pretty big overhaul.

At least, that is what will happen if legislators adopt proposals being considered by the Tax Reform and Relief Task Force. This task force is beginning to conclude its work, wrapping things up before a September deadline. It recently met to adopt some proposals for final consideration. Many of those proposals would make some long-overdue reforms to improve the state’s tax code.

Nicole Kaeding of the Tax Foundation has been one of the experts that have testified in front of the task force. She has offered numerous good ideas for its members to consider. She has also been very good at summarizing what has been going on with the task force as it has been deliberating.

Arkansans should read Kaeding’s blog post on the proposals approved for final consideration. She gives a good overview of the ways that the state’s tax code could change. According to Kaeding, “If fully implemented, these proposals would improve Arkansas’s tax code, making the state more competitive among its regional peers.”
How might tax rates change? According to Kaeding, the task force’s proposal “consolidates the three rate schedules and lowers the top marginal rate from 6.9 percent to 6.5 percent.”
Here is what could happen to corporate taxes:

The task force voted to continue to explore lowering the corporate income tax rate from 6.5 percent to 5.9 percent, using tax triggers. The exact design of the triggers is being finalized. Net operating losses would be extending from five years to 20 years, matching most other states.  Additionally, the task force had previously voted to include a repeal of the state’s throwback rule and a move to single-sales factor in its final report.

For sales taxes, it appears the task force will not do much to recommend eliminating the many exemptions that currently plague the tax code. It will, however, support taxing remote sellers in line with a recent Supreme Court decision.

A cigarette tax hike appears to be dead.

The task force may recommend that fuel taxes be indexed to inflation. A related fee may be put on the users of hybrid and electric cars.

These are all generally good ideas. While not an ideal tax reform, this package would be a good way to improve the state’s tax code, as Kaeding notes:

If all of these proposals are adopted (and fully phased in), Arkansas would see an improvement in its tax competitiveness. According to the State Business Tax Climate Index, Arkansas would increase from 39th overall to 36th overall. The corporate income tax variable, in particular, would improve.

The task force will make its final recommendations next month. After that, it is up to legislators and the governor to determine if any of these changes become law.