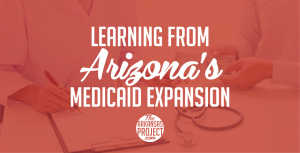 Whether it was called the “Private Option” or “Arkansas Works,” TAP has always pointed out the problems that would come with expanding the state’s Medicaid program. Lawmakers in Little Rock didn’t listen to us, and this expansion is now underway. Other states took similar steps to expand their Medicaid programs before Arkansas, which gives us a chance to see how they are faring. A recent report from Arizona shows that the promises made pre-expansion aren’t matching the reality post-expansion.

The Goldwater Institute recently published a report that looked at how cost-shifting was affected in a post-expansion world. Arizona legislators expanded Medicaid in 2013, partly justifying their actions by saying that it would alleviate the practice where doctors shifted the cost of caring for the uninsured onto patients who had insurance. That is, they claimed that without expansion, insured patients were paying higher costs to subsidize the care given to the uninsured.

The claim was that expanding Medicaid to reduce the uninsured population would lead to less cost-shifting, thus saving money for those who had private insurance. This was the same rationale used by those pushing Arkansas Medicaid expansion. Here is what the Arkansas Insurance Department wrote to justify the Private Option: “Because of significant reduction of uncompensated care for uninsured patients and related cost shifting, and increased competition in the marketplace, the State expects deflationary pressure on the cost of care which should reduce premium pricing.”
So how did that work out? As the researchers, Naomi Lopez Bauman, Angela C. Erickson, and Christina Sandefur discovered, not so well. Here is what they found:

Arizona’s Medicaid expansion did not alleviate the so-called hidden healthcare tax on the insured. Before Medicaid was expanded, proponents in 2007 claimed that the cost shifting to private payers amounted to 14 percent above hospitals’ costs, and expansion was necessary to alleviate that number. But our study found that private payers paid 27 percent above hospital costs in 2016—yes, three years into the Medicaid expansion, the proportion of cost shifting had actually increased.

Hospitals’ list prices for services increased more for insured patients than for the uninsured. Total charges for all payment groups (public and private) went up, but Medicaid charges in Arizona’s emergency departments alone increased more than 300 percent.

Will the same thing happen with Arkansas Works? While no similar evaluation has been done, there is no reason to think that this state will be much different than Arizona. The authors of the Goldwater Institute report note, “A program should be evaluated based on outcomes, not intentions. Arizona’s expansion not only failed to deliver on its promise to alleviate supposed cost burdens on private payers, it exacerbated them.” That is something that Arkansans need to keep in mind as Arkansas Works continues to be implemented.