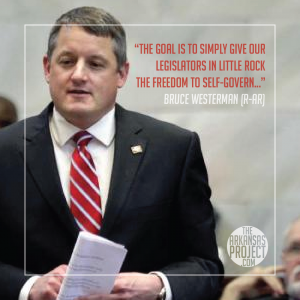 Freshman U.S. Rep Bruce Westerman introduced a bill last week that would give state legislators across the country much-needed flexibility and distance from the federal government with respect to Medicaid expansion.
From Westerman in Talk Business:

The next step in reducing the burdens imposed at the federal level is the focus of my first bill, introduced this week, the State Flexibility and Workforce Requirement Act of 2015. The bill, H.R. 886, would rewrite federal code and allow Arkansas, and other states, the freedom to create workforce incentives on non-disabled, working age individual Medicaid recipients without having to get the permission of the Obama administration.
During my time in the Arkansas General Assembly, I came to realize that while I was attempting to do what was best for my state house district, my hands were often tied by the laws and regulations put in place at the federal level. Since arriving in Washington last month, I’ve seen it first hand with states like Indiana, North Carolina, and Utah denied the ability to create a workforce requirement for able-bodied individuals seeking to use the Medicaid entitlement.
Since the Supreme Court found that states had the right to determine whether they expanded Medicaid, it only follows that states should have the right to create policies that best fit their needs, which is what this legislation does.
However, as we have seen time and again with the Obama administration, attempts by states at self-governing are often beat back by an executive branch that thinks it knows better than us, our families, and the men and women in state legislatures around the nation elected by us in cities and towns like Alma, Hot Springs, Magnolia, Mena, and so many others.

Indeed, Utah attempted to place a work requirement for enrollees in a waiver request to the federal government in January. However, that request was denied by the Obama administration.
Currently in Arkansas, approximately 80,000 “private option” Medicaid expansion enrollees don’t work at all.
Given the continuance of the program until at least the end of 2016, there’s apparently not much state legislators can do about the fact that almost 40 percent of enrollees aren’t working.
I assume Westerman’s bill has little chance of becoming law while President Obama is in office. However, it’s nice to see Westerman is at least attempting to give states some much-needed relief when it comes to our inflexible federal government’s posture on Medicaid expansion.