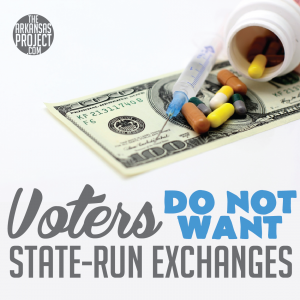 A new poll out by the Foundation for Government Accountability (FGA) shows that setting up state-run Obamacare exchanges is deeply unpopular with voters.
That choice — whether to set up a state-run exchange — will only become more important this summer, when the Supreme Court decides in King vs. Burwell whether enrollees in a state without a state exchange can still constitutionally receive federal Obamacare subsidies.
Currently, Arkansas legislators are postponing a final decision about whether to set up a state exchange until King vs. Burwell is decided.
If Arkansas legislators decide to set up a state-run exchange after the Burwell decision, it would be at odds with the wishes of the vast majority of voters, according to the FGA poll.
From FGA:

You can read the rest of the polling data here.
According to the poll, the biggest reason for voters’ opposition to having their state set up an exchange (instead of having the federal government run it) is that state taxpayers would be on the hook for the operating costs of a state exchange.
At a time when Arkansas and other states are facing budget crunches, why voluntarily create a state exchange — and thereby subject state taxpayers to another expensive undertaking?