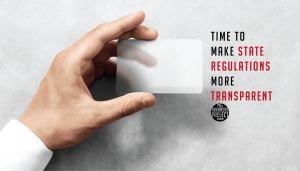 As long as government has existed, regulations have, too. In the modern age, regulations cover nearly every aspect of our lives. Wouldn’t it be nice if the state made it easy for Arkansans to know what rules they are expected to follow?
Unfortunately, it doesn’t.

James Broughel, a research fellow with the Mercatus Center, has been reviewing regulations across the 50 states. He found that Arkansas is unique in the U.S. for not having its regulations compiled in an administrative code. Such a code where the state gathers all its rules in one place so they can be found relatively easily. Instead, Arkansas’s regulations are published in a register, a list of government activity. They are not compiled in one place.

In a recent op-ed, Broughel describes the problems this can cause for those looking to know what is permitted or banned in the state:

A running list of rules published in the Arkansas Register can be found on the Arkansas Secretary of State’s website. At first glance, it looks like an administrative code. But this list includes rules that are decades old, as well as amendments made to those rules over the years.

Take “Regulation #2” from the Arkansas Pollution Control and Ecology Commission, a rule that relates to water quality standards. The Secretary’s list includes versions of the rule running from the 1960s through the 1980s with amendments made as recently as 2017.

Luckily, the current regulation is available on the agency’s website, but the public should not have to go from agency to agency and rule to rule to figure out what the law says.

Broughel also points out issues with the Secretary of State’s website:

The Secretary of State’s website is also a mess. Some documents are written in track-change format. Many files are scans of old documents (some with sticky notes still attached). Some regulations begin with letters written by private law firms, leading to the obvious question: Are government agencies or lobbyists writing the rules?

In the op-ed, Broughel noted that Arkansas recently enacted a law that would reform the state’s regulatory process. Rep.

Jim Dotson sponsored the bill that became the law known as Act 781. I spoke with him about whether there would be further reforms to Arkansas’s administrative process. He said that the state government is in the middle of implementing Act 781, but he indicated that it is possible for more to be done. Rep. Dotson told me that he is “open to looking at future reform, including discussion of a searchable online database of regulations. But it will require future discussions and deliberations after the current reform is completed.”
That sounds like a good approach to me. The current review being undertaken in compliance with Act 781 should give a useful roadmap for future efforts. It seems likely that this will lead to an administrative code. If other states can compile their regulations this way, so can Arkansas. This would offer more transparency for what the various state agencies are doing and give the public a better idea of what rules govern their lives.