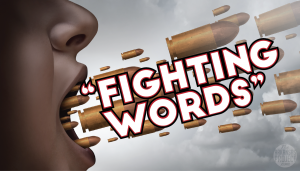 Since podcasts seem to be in vogue nowadays, I imagine that there are a few TAP readers who listen to them. If you are a podcast aficionado, you should check out the “Make No Law” podcast recently launched by Ken “Popehat” White.

The first episode was a very good one, concerning the case of Chaplinsky vs. New Hampshire. If you’ve ever heard about the “fighting words” exception to the First Amendment, this will be of interest to you. It even has some bearing on the ongoing dispute in Arkansas over tort reform.

In 1940, a police officer in Rochester, New Hampshire, arrested Walter Chaplinsky. According to the officer, Chaplinsky said, “You are a God-damned racketeer” and “a damned fascist” to him. A judge concluded that this speech was against the state’s law against offensive speech. Chaplinsky appealed, claiming that this law was vague and violated the First Amendment. The Supreme Court, however, ruled against Chaplinsky. The court, in a unanimous decision, held that certain words could be prohibited: “These include the lewd and obscene, the profane, the libelous, and the insulting or ‘fighting’ words — those which, by their very utterance, inflict injury or tend to incite an immediate breach of the peace.”
Unfortunately for Chaplinsky, he was not allowed to present the full context of that day at trial. According to him, he was surrounded by a crowd of people angry at his preaching. Chaplinsky was a Jehovah’s Witness; they were especially unpopular at that time for their alleged unpatriotic activities (such as their refusal to salute the flag). It seems plausible that one crowd member had come close to badly injuring Chaplinsky just before he yelled angrily at the policeman, and other crowd members seemed likely to do so at any moment. It was the job of the police to protect him from the crowd, and they appeared to be siding with the crowd against him. One person even tried to impale Chaplinsky with a flagpole. In a fit of anger against a police officer who was refusing to do his duty, Chaplinsky uttered his famous “fighting words” (listen to the podcast for a much more detailed explanation of the incident). When the state court refused to allow the jury to hear evidence that Chaplinsky was provoked by the police officer, it virtually assured that he would be convicted.

This case has a relevance to the debate over tort reform. Part of the opposition to SJR 8 comes from lawyers who argue that courts – and only courts – should be able to determine their own rules and procedures.

Dan Greenberg, AAI’s former president, has argued that there are times when judicial rules and procedures influence public policy. In the Chaplinsky case, the fact that the jury was disallowed from being informed about the circumstances under which Chaplinsky uttered his “fighting words” led to a decision that had a profound effect on free speech public policy. As the Supreme Court decision acknowledges, the state court refused “to admit evidence of provocation and evidence bearing on the truth or falsity of the utterances.” If it had, this case may well have turned out differently.

I am aware that a few GOP candidates and public officials have argued that they like judicial rulemaking just the way it is. But It is very strange to see self-styled conservatives arguing that the courts should have monopolies on government power — a feature that is at odds with our political system.