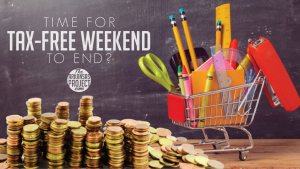 The Arkansas Tax Reform and Relief Task Force should end the back-to-school sales tax holiday —- so our tax code can be more competitive with the rest of the nation.

Because of sales tax changes passed in 2011, some purchases of clothing and school supplies will be free from taxation in Arkansas on August 5 and 6.

While the holiday always gives legislators a chance to brag about their tax-cutting bonafides, it accomplishes little towards making Arkansas’s tax climate more competitive with the rest of the nation.

The nonpartisan Tax Foundation puts out an annual report that questions the efficacy of sales tax holidays.

From the Tax Foundation’s 2017 report:

Taxes should raise revenue, not micromanage a complex economy by picking winners and losers in the market. Lawmakers should aim to raise the necessary revenue in the least economically distortionary and destructive way. To achieve this goal, sales taxes should be neutral toward products and timing decisions: all end-user goods and services should consistently be subject to the same sales tax. Narrowing the tax base, by contrast, is likely to lead to higher and more damaging taxes elsewhere.

While Arkansas and 15 other states currently have sales tax holidays, other states and localities have scrapped them in recent years.

From the Tax Foundation:

The North Carolina example may be particularly important — many task force members see it as a state to emulate when it comes to implementing tax reform.

Because of these reforms, North Carolina has the fastest growing economy and population of any state in the nation.

Was all of this good news in North Carolina solely due to getting rid of their back-to-school sales tax holiday in 2013? No, but ending counterproductive tax loopholes like sales tax holidays are a prudent component of developing tax reforms that contain broad tax reductions for all citizens.

To be sure, we’re not arguing that Arkansas should simply junk the exemption; rather, Arkansas should rely on the new revenue that would result for economically productive tax relief.

Ending the back-to-school sales tax holiday for major tax reform like North Carolina’s would be one step towards making being a taxpayer in Arkansas feel like a holiday all year long.