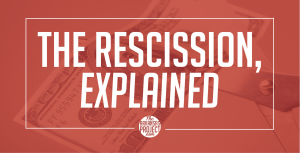 Rick Crawford, French Hill, Bruce Westerman, and Steve Womack hate kids? If you read what R. Bruce Smith of Hot Springs recently wrote in the Hot Springs Sentinel Record, you may think so. Looking further into the issue raised by Mr. Smith, however, will illustrate that this charge is yet another example of political hyperbole run amok.

Mr. Smith has a long list of complaints about what President Donald Trump and the members of Congress – especially the Arkansas congressional delegation — are doing. Among the things he laments being done is that “they passed a bill that would cut numerous domestic programs with children’s health insurance receiving the largest cut of $1.2 billion over 10 years. So much for those self-promoting photos with poor kids.”
From what I can tell, Smith is talking about the budget rescission legislation, HR 3, requested by President Trump and supported by all the members of the Arkansas House delegation. There is obvious confusion about this action, since it has been so rarely used. Under the Congressional Budget and Impoundment Control Act of 1974, the president may ask Congress to rescind budget authority that it has previously granted him. Such a request must be acted upon within 45 days and is not subject to Senate filibuster. On May 8, President Trump requested 38 rescissions of budget authority, totaling $15.4 billion. These include:

As can be seen from this list, these are fairly innocuous items. However, never underestimate the ability of a partisan to misrepresent legislation to fuel a partisan political attack. This is especially true when it comes to any government program with the word “children” in its title. Anyone proposing a budget cut or alteration of such a program will automatically be accused of hating kids.

As the Washington Post pointed out, however, much of the funding covered by this request could not be spent anyway. That is especially true with the Children’s Health Insurance Program, the target of Mr. Smith’s concerns. The authority to spend the money affected by this bill had already expired. The federal government’s authority to spend $5 billion of the CHIP money expired in 2017; it cannot be spent regardless of whether Congress passes the president’s rescission request or not. Another $2 billion would come from a contingency fund for CHIP, but that fund is rarely used and likely has enough money in it to make payments until 2028.

In a world free of ideological posturing for political ends, this budget rescission bill would be fairly innocuous. It is almost a routine housekeeping measure, repealing spending authority in many areas where it has already expired. But today, every action in D.C. (or Little Rock) can be twisted around to make an attack on disfavored elected officials. Hopefully, the people of Arkansas will see through the types of dishonest attacks like this and look for the facts.