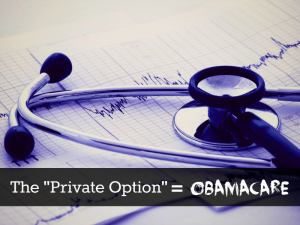 It’s not been a great legislative session for conservatives opposed to the “private option” Medicaid expansion program, but a bill by Rep. Donnie Copeland about to become law is one bright spot.
From Arkansas Online:

Now, I’m not exactly certain that the “private option” will be ending at the end of 2016 (as some Republicans are saying). However, this bill would at least apply some pressure to Department of Human Services bureaucrats and state legislators to end the program, because, you know … DHS will be sending out letters saying the “private option” is ending.
This bill will also make it harder for some legislators and bureaucrats next year to claim they never said the program was ending. (In the recent past, private option defenders have regularly resorted to the argument that it would be cruel to end the program without sufficient notice to enrollees.)
So, it’s official! The “private option” is ending! Who told me? Arkansas DHS bureaucrats!

2 thoughts on “The “Private Option” Is Ending! DHS Says So!”