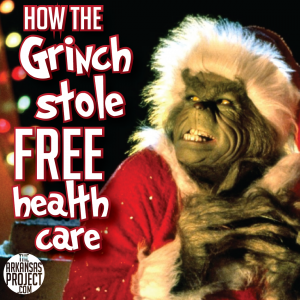 It almost sounds like a Christmas miracle: doctors, dentists, and other medical workers volunteering their time to give free dental treatments to 7,000 people who lack health insurance. That’s what Remote Area Medical — a crew of charitable health-care workers — planned to do in New York last month. But then the Grinch showed up to shut charity down.
Who was the villain in this case? Was it the evil insurance companies, looking to make sure that no one threatened their bottom line? Or maybe dentists banded together to attack the volunteers that would cut into their profits? Or perhaps the neighbors, in a fit of NIMBYism, complained?
No, the Grinch of this Christmas story is the state of New York. Government bureaucrats made sure that 7,000 New Yorkers would not get free dental care. Hilariously, they did so under the guise of protecting the public health.
Sounds strange, right? How could providing free dental care threaten public health?
Well, actually, it wouldn’t. But providing free dental care would threaten the regulations established by the state of New York that claim to protect public health. In reality, these regulations restrict citizen access to medical care while driving up its price. If blocking charities from helping people were a crime, the state of New York would be on trial and the case of Remote Area Medical would be Exhibit A.
Remote Area Medical is a well-established organization that goes around the country setting up, essentially, free health care fairs. Doctors, nurses, dentists, and other medical professionals volunteer their time to provide a variety of free services to people who cannot afford another health care option. Check out this report from “Nightline” to get a good idea what they do.
Remote Area Medical relies heavily on out-of-state health care professionals during their events. These men and women are licensed to practice health care in one state, but often volunteer at a Remote Area Medical event in another state. That, however, generally violates state law.
In New York, authorities wanted Remote Area Medical to partner with a state-licensed organization. There is no public health rationale for this. It’s simply enforcing an arbitrary state regulation at the expense of the public good. Or, to be more cynical (or, alternately, more realistic), the state is enforcing a regulation to protect established health care providers from competition.
Remote Area Medical has encountered this situation before. The state of Missouri actually passed a law (over the governor’s veto) to allow out-of-state doctors to provide free medical care in that state. That’s something that New York should consider.
Or maybe lawmakers really think their restrictions on out-of-state doctors providing free medical care is necessary to protect the public. If they do, then these legislators make the Grinch look pretty good. After all, he only stole some presents (and some roast beast). New York legislators and regulators have stolen health care, something that’s far more important than toys in Whoville.