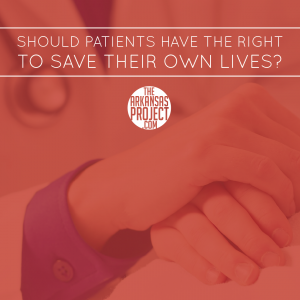 Should terminally ill patients have the right to try any type of medicine that may be able to prolong their lives?
That’s the question at the heart of what is called “Right to Try” legislation. If Senator John Cooper gets his way, the answer in Arkansas will be: “Yes, medical patients have a right to try to save their own lives.”
Senator Cooper pre-filed a bill that would give Arkansans with terminal diseases the right to try potentially life-saving treatments that have yet to be approved for general use by the Food and Drug Administration (FDA). The only treatments that could be used are ones that the FDA has shown to be safe, but which have not yet gone through the process of proving they work.
When I spoke to Senator Cooper, he said, “Right now we have a lot of good medications in the pipeline. One day a lot of them will be in the market to save lives. What terminally ill people don’t have is time.”
The Goldwater Institute, which pioneered this law, describes why it’s needed:

The FDA … often stands between the patients and the treatments that may alleviate their symptoms or provide a cure. To access these treatments, patients must either go through a lengthy FDA exemption process or wait for the treatments to receive FDA approval, which can take a decade or more and cost hundreds of millions of dollars. Sadly, over half a million cancer patients and thousands of patients with other terminal illnesses die each year as the bureaucratic wheels at the FDA slowly turn.

Patients should be free to exercise a basic freedom – attempting to preserve one’s own life. The burdens imposed on a terminal patient who fights to save his or her own life are a violation of personal liberty. Such people should have the option of accessing investigational drugs which have passed basic safety tests, provided there is a doctor’s recommendation, informed consent, and the willingness of the manufacturer of the medication to make such drugs available.

For those who have seen “The Dallas Buyers Club,” the rationale of this law should be clear: anyone facing a deadly disease should, once fully informed, be able to try experimental drugs that may help him or her. Doing so may not only prolong the patient’s life, but also may provide knowledge that helps others. It’s a potential win-win.
Laughably, the Washington Post notes that some oppose this law because it “threatens to harm more people than it helps by providing access to medications that haven’t been proven safe and effective.” Because the law would only apply to drugs that have been proven safe by the FDA, the first part of this objection makes no sense. And the second argument, that it might harm someone by being ineffective, is also baseless. If the drug is ineffective, wouldn’t that be the same as taking no drug?
Senator Cooper stressed to me that he wrote the bill very carefully to make sure people could not use it to take dangerous drugs or other unsafe treatments. He also conceded that there was not a large group of Arkansans would be affected by it. But he noted that for those who have no other options than experimental drugs, this bill could be critical.
“I’m certain it will save someone’s life along the line,” he said.
Five states already have this law. It’s hard to see why Arkansas shouldn’t join them.

One thought on “Should Patients Have a Right to Try to Save Their Own Lives?”