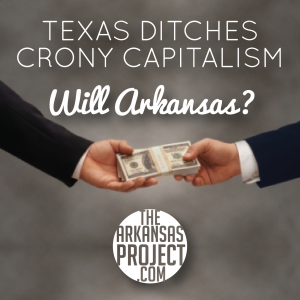 Grant Tennille, executive director of the Arkansas Economic Development Commission (AEDC), is probably best known on this blog for this quote in 2012 regarding crony capitalism:

I say this all the time. I hate incentives. I don’t think we ever should pay a dime to anybody to do anything. But I feel about incentives the same way I feel about nuclear weapons. I will happily be the second guy to put mine down.”

Interestingly enough, Texas has at least begun discussing ending crony capitalism in recent weeks by abolishing the Texas Enterprise Fund (the Texas version of the Quick Action Closing Fund, an Arkansas Program that bureaucrats use to throw taxpayer money at private businesses).
From a recent San Antonio Express-News editorial:

The Texas Enterprise Fund has long been criticized as nothing more than a slush fund for Gov. Rick Perry. Now, that status is official.
With the Texas State Auditor’s Office issuing a scathing review of the fund’s handling, the most appropriate response from state lawmakers next biennium would be to abolish it.
…
In its 2013 biennial report, the governor’s office claimed 66,094 jobs created. In fact, this is the number of jobs that grant recipients are required to create, the audit notes. In reality, over the past decade the fund has provided grants of $505 million, generating 48,317 jobs.
Consider the case of Triumph Aerostructures, which received $35 million from the state via a company it acquired.
“Auditors could not determine the actual number of new jobs the recipient created because of weaknesses in the provisions of the award agreement,” the audit says.
Or consider the case of Scott & White Memorial Hospital in Bell County, which received $7.5 million in 2007.
The hospital met its job-creation requirements for the end of 2012, but there were errors that inflated its job numbers. And one requirement was that the hospital had to build a cancer research center. It had already built one in 2005.
At minimum, all of the state auditor’s recommendations need to be adopted for this fund to continue to exist.
A better option would be to simply abolish this slush fund.

You’d think Arkansas might want to start talking about something similar, with  “investments” from the Quick Action Closing Fund in recent months not working out too well, but I won’t hold my breath — judging by a recent letter the Chamber of Commerce sent to gubernatorial candidates.
For more on crony capitalism in Arkansas, read about a recent report regarding tax credits the state gives out that do nothing to spur job creation.