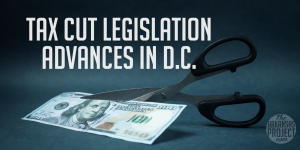 The House of Representatives passed a major tax overhaul last week. All four members of the Arkansas House delegation voted in favor of a bill that would make numerous changes to the tax code.

Steve Womack said, “For the first time in over three decades, the House has taken action to allow Americans to keep more of their hard-earned money while making our businesses competitive with their global counterparts. Growing our economy, simplifying the tax code, and helping hard-working Americans is something worth celebrating.”
Here are some of the changes this bill would make to individual and corporate income tax rates (see the Tax Foundation’s detailed analysis here):

This legislation now moves to the Senate for consideration. The Senate Finance Committee has its own version of a tax bill. This proposal includes a repeal of the Obamacare individual mandate, something Senator Tom Cotton has been very vocal about. In fact, Senator Cotton was full of praise for this bill upon committee passage, saying, “I’m especially pleased that the tax legislation the Senate Finance Committee approved includes my proposal to repeal the Obamacare individual-mandate tax. As I’ve said before, this tax is the most hated part of Obamacare and repealing it will pay for a lot more tax cuts for working families.”
Assuming the Senate passes tax legislation, the differences between this bill and the House bill must be worked out. One of the main sticking points may be the individual mandate repeal. However, there appears to be broad agreement in the Arkansas congressional delegation in support of tax cut legislation. It would be surprising if any of the state’s House members or senators voted against the final tax bill.