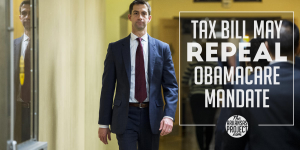 Senator Tom Cotton is a long-time foe of Obamacare’s mandate — the mandate that requires everyone to purchase health insurance (also known as the “individual mandate”). The tax reform legislation moving through the Senate may finally give him a victory on that front.

Arkansas’s junior senator sponsored legislation with Senator Pat Toomey (R-PA) in October that would repeal the individual mandate. Senator Toomey sits on the Finance Committee, which is writing a tax reform bill this week. This position allowed him to place the individual mandate repeal in this bill, and it looks like he has the backing of the GOP caucus in doing so.

You may think it’s strange that a health care matter would be included in a tax bill. You may also remember, however, that the Supreme Court ruled that the individual mandate was constitutional precisely because it is a tax. The majority of the court held that the federal government is not compelling anyone to purchase insurance; it is merely taxing them if they do not. Since this “mandate” is technically defined as a tax, it can be repealed with tax legislation.

President Trump has called on Congress to use the tax bill to repeal the individual mandate, but the tax legislation in the House of Representatives does not contain this provision. It appears that the Senate bill will do so, however. With Senator Toomey on the Finance Committee, that makes sense. It also helps that the mandate’s repeal would, under budget scoring rules, lead to more revenue for the federal government through reduced use of health insurance subsidies.

The revenue aspect of this issue is something that Senator Cotton has been touting as a positive. He tweeted in October that “$300 billion pays for a lot lower tax rates for families & businesses, much better than repealing popular, widespread deductions.” This new revenue would offset revenue lost from tax cuts, which makes it easier to move the bill through the Senate.

It is unclear what will happen with the individual mandate repeal. While there is momentum in Congress for tax legislation, the Republicans’ thin majority in the Senate could pose problems in producing a consensus bill. The inclusion of the individual mandate repeal in the bill could also complicate its passage by interjecting a debate over Obamacare into the debate over tax legislation. For the time being, however, it seems that there are 50 votes in the Senate to pass the Finance Committee’s tax proposal.

For those who support an individual mandate repeal, the Senate Finance Committee’s willingness to include this provision as part of its tax package is a very good sign.