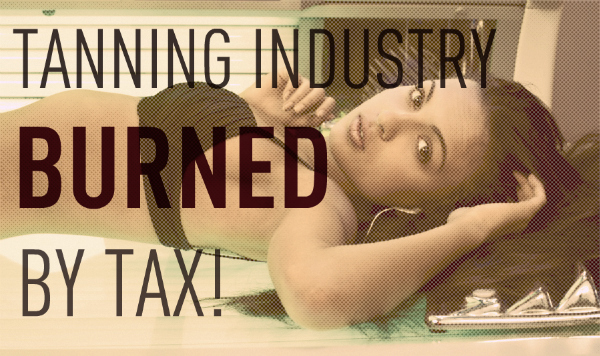 Though the Arkansas health insurance benefits exchange has been declared DOA, we must remain on guard for all the still-awful Obamacare wrinkles that this shoddily drafted law will visit upon us for lo these many years to come. This is your life now, so you might as well learn to cope with it.

While cobbling together the health care reform bill in 2009-2010, Congresspeople hit upon the idea of slapping a 10 percent excise tax on indoor tanning services. It wasn’t a big piece of the pie, projected to raise a relatively piddling $2.7 billion over 10 years. But the money had to come from somewhere, see, because it turns out that all this free health care is gonna cost an arm and a leg.

The government started collecting the tax in July 2010; it was projected that in the 2011 fiscal year, the feds would pull in a smooth $200 million. But it’s just never that simple, is it? As USA Today reported a few weeks back:

Using an April 2010 Indoor Tanning Association estimate, the IRS initially projected the tax would be due quarterly from roughly 25,000 stand-alone tanning salons, plus spas, health clubs and beauty parlors.

But the inspector general report found that actual tax returns filed for the first three quarters through March 31 averaged just above 10,300.

Tanning tax receipts for that nine-month period totaled $54.4 million, the report found. That was below projections by the Congressional Joint Committee on Taxation, which had estimated the tax would raise $50 million in the last three months of fiscal year 2010 and $200 million for the full 2011 fiscal year.

I checked with John Overstreet, who heads up the Indoor Tanning Association (ITA) in Washington, D.C., for some background on the tax. Overstreet noted that the tanning tax was a fallback position, slipped into the reform package after lawmakers abandoned a proposed excise tax on Botox injections in the face of resistance from pharmaceutical manufacturers and doctors.

“It was really a poster child for how not to make tax policy,” he said. “The tax code was being used to punish one industry for the benefit of another.”

And the new tanning tax has had a negative impact on his industry nationwide: “You can’t increase prices by 10 percent without affecting demand,” he said.

Overstreet says 12 percent of the indoor tanning businesses in Arkansas have folded in the last three years, based on his association’s figuring: In 2008, Arkansas boasted 284 salons; by 2011, that was down to 251. Most of these are small independent operations, and more than half are owned by women, according to ITA.

OK, so that’s maybe a few dozen salons that shut down, give or take, some of which closed before the tax went into effect, so we can’t necessarily attribute the dynamic entirely to the tax. But it’s tough to argue how slapping a 10 percent tax on an industry’s services in the middle of a recession could do anything to help that industry thrive.

To fill out the picture, look at Sun Ergoline in Jonesboro, which manufactures tanning beds. In March 2010, the company told ace reporter Charlie Frago of the Arkansas Democrat-Gazette they’d be cutting jobs and reducing hours for other workers due to a decrease in demand for their products, which an Ergoline spokesman attributed to the tanning tax. I’ve contacted the company to ask about how that’s shaped up since the tax went into effect. I’ll update if/when I hear back from them.

Meanwhile, legislation was introduced in the U.S. House of Representatives earlier this year to repeal the tanning tax. Arkansas’ own First District Congressman Rick Crawford (R) is a co-sponsor.

Oh, well, that’s your Obamacare, right there, it’s all for the greater good, and after all and as always…there is no bad news.

UPDATE: No sooner had I posted this then I saw this piece on the Daily Caller from John Kartch of Americans for Tax Reform, discussing how the tanning tax and other tax hikes in the health care reform bill are killing jobs. Let’s block quote it!:

Makes you wonder how many people lost their jobs, how many business owners closed their doors, how many thousands of extra hours were spent on tax compliance rather than customer service, all because Obama and co. “needed money to make the bill work.”

It DOES make you wonder that! Good point, John Kartch!