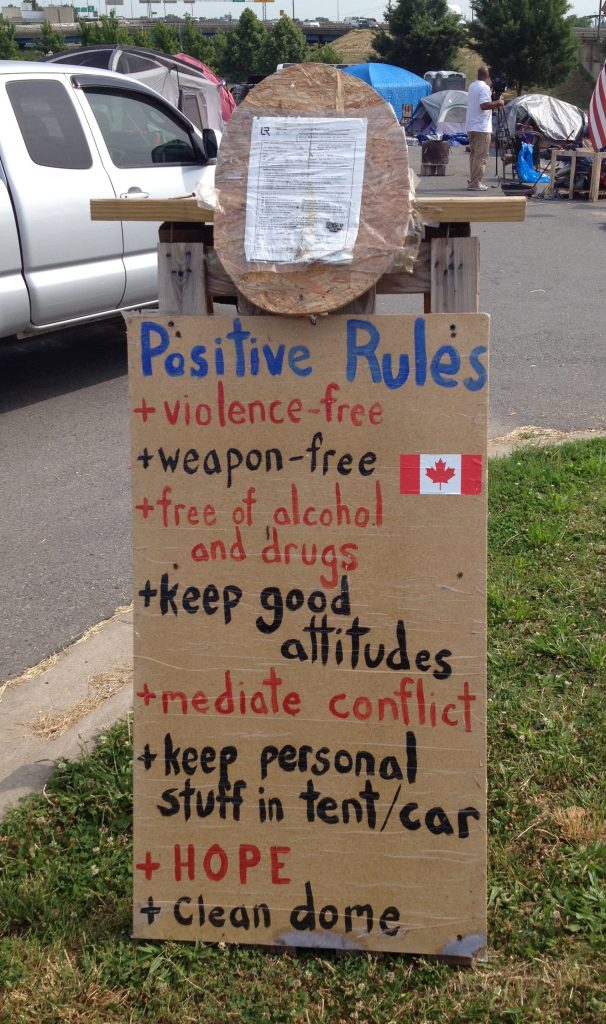 I made a trip down to Occupy Little Rock today, in light of their seemingly imminent eviction from city property at 7:00 a.m. tomorrow–as you’ll see in the following video(s), they aren’t so sure the eviction will take place.  It was kind of like walking into a warzone with all of the debris and trash, as you can see from the picture below, albeit peaceful.

Anyway, I had a great discussion with Mac Miller, a self-proclaimed spokesman for the group.  He was very cordial and forthcoming with his beliefs, although he and I found more than a few places of disagreement.

Mac says the tent is the symbol of the Occupy movement and therefore, according to the case law he has studied, should be protected speech.  (Dan Greenberg editorial intrusion: this theory is interesting, but insane.)

I asked him Mac to fill me in on the developments with the city of Little Rock, why the group’s ‘right’ to occupy the property trumps the city’s (i.e. taxpayers’) right to use the public property for city services, specifically parking, and if he would be comfortable with a group of protesters gathering on the lawn of the governor’s mansion–I really hope they don’t take me up on this idea.

When asked if Mac would be comfortable with myself or someone else making camp inside his tent, he said “I’ve got a little bit of a problem with that because I’ve got things in there I’d rather not [have] people going thru.”

He also speculated that the city is trying to evict the group because of their support for the anti-lobbying petitions that are being circulated around the state, formally known as “Regnat Populus.”

Find all of this and much more in the following two videos (I apologize that they are two separate files–someone had the nerve to call me while I was interviewing Mr. Miller):

One thought on “Talking Rights With Occupy Little Rock”