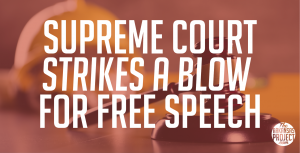 In an eagerly awaited decision, the Supreme Court ruled in Janus v AFSCME that government workers who are not members of a union could no longer be forced to pay a union fee. This case is both more limited than you may believe from headlines — but it’s also incredibly significant for the future of organized labor and the political agenda it pursues.

The heart of the Janus case was a free speech concern, as Tim Sandefur of the Goldwater Institute points out:

That limits the ruling to apply only to government unions, not private sector unions. It also does not affect government unions in right-to-work states like Arkansas, since workers in these states were not compelled to pay an agency fee to unions. In states with a “closed shop” law, states that are not right-to-work, a government worker was not forced to join a union as a condition of employment, but he or she was forced to pay a fee to the union for the representation that the union ostensibly provided. In essence, whether someone wanted to join a union or not, the state forced that worker to give the union a portion of his or her paycheck.

The Janus decision was a victory for workers’ free speech rights, but it was a big loss for union bosses. Looking at data from right-to-work states, like Arkansas, it is clear that when people are not compelled to pay a fee to a union regardless of membership, fewer government workers join a union. That makes sense. If you are going to be forced to pay a fee even if you aren’t a member, then most people will choose to become a member, since that has a few added benefits. But if they aren’t forced to pay a fee, then people will weigh the benefits of membership versus the cost of the union dues. Quite often, their action show that they don’t value the union’s work.

As you can see, states that gave government workers freedom to decide whether to pay unions for representation had far lower rates of unionization. States that compelled non-members to give money to unions had much higher rates of unionization. That is why unions were so fearful of what might (and what did) happen today – when many workers have a choice, they don’t choose unions. It says something about organized labor’s business model that they must rely on government compulsion to maintain high membership rates.

I have nothing against unions. I grew up in a union household and am married to a union member. But I do not like the government giving unions the power to charge non-members a fee for any supposed representation they provide. That is ultimately a political argument, however. States have the ability to craft their laws to allow workers to opt out of agency fees or compel them to pay for them.

Janus was about a narrower issue – how unions representing government workers necessarily engage in political activism as a part of their jobs. But the fact that unions view this ruling as having potentially catastrophic impacts on them goes to the heart of the problem with unionization. Unions should attract members the way any other organizations do – they should provide a service that benefits workers. If they cannot do this, then the state should not force non-members to pay them money.