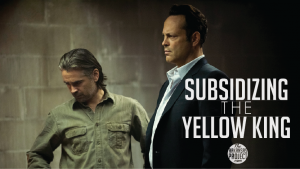 Fans off the HBO series “True Detective” are excited by the recent news that this hit show is coming back for a third season. Governor Asa Hutchinson is excited that this season will film in northwest Arkansas. The state is playing a key role in helping a critically-acclaimed show come back to TV. Sounds like a win-win, right?
This is indeed great news — but only if you aren’t one of the state’s taxpayers.

You see, “True Detective” will be receiving generous state subsidies. The Arkansas Times reports these giveaways could reach $16 million or more.

I like “True Detective” (even the much-maligned second season). I am glad to see its return. But as an HBO subscriber, I have paid to have this and other programming available to me. There is no good reason for the taxpayers of Arkansas (or any other state) to subsidize my viewing choices.

Unfortunately, these subsidies are popular. Many states, not just Arkansas, give taxpayer money to film companies in a misguided attempt to “create jobs.” That may sound like a reasonable justification, but it does not hold up under close scrutiny. I wrote about the folly of film subsidies in a 2015 paper:

Film production in Arkansas has undoubtedly increased due to its film subsidy program. After all, it is a basic economic truism that if you subsidize something, you get more of it. However, policymakers make a large mistake if they only examine the benefits of this program. Using taxpayer dollars for film subsidies imposes a cost not only on taxpayers, but on the economy. As experience in other states has shown, these programs return very little to the state treasury and they generally cost tens or hundreds of thousands of dollars for each job created. What is the effect of such programs in Arkansas? It’s possible that our experience with film subsidies has been much better than in other states – although quite unlikely – but all we know at this point is that those who support this program, based on the measurement of its effects, are essentially wandering around in the dark.

Film subsidies are a costly way to grow a state’s economy. They give money to production companies, diverting it away from funding core functions of government. Experts in many other states have realized the folly of film subsidies. Arkansas policymakers should consider both the costs and benefits of its film subsidies, and ask themselves what evidence there is that this is a program that is worth retaining. More generally, policymakers who want to encourage economic development should discard wasteful taxpayer-funded subsidies – and they should use the extra money in the state treasury that junking such subsidies would create to establish lower tax rates, which would attract jobs and capital investment to Arkansas.

I welcome a quality show like “True Detective” being filmed in Arkansas. But state politicians and others who support the state’s film tax credit to subsidize this production are fooling themselves if they think this program is a good way to create jobs. The subsidy program is merely a way to funnel taxpayer dollars to wealthy out-of-state business owners. It’s time for legislators to do some detective work of their own — if they do, they’ll discover that the promises of this program don’t live up to the hype. Killing the film subsidy program would certainly be no crime as far as state taxpayers are concerned.