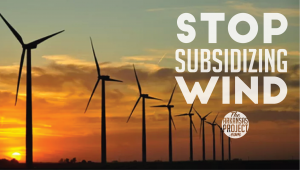 A proposed wind farm being built by SWEPCO in Oklahoma is causing controversy in Arkansas. Whether you support this proposal or not, I’d hope that TAP readers would agree that one thing should not be controversial – wind energy should thrive (or die) on its own, without ratepayer or taxpayer subsidies.

Wind energy projects usually meet opposition when they are proposed. This project is no different. A group called “Protect our Pocketbooks” contends that the Oklahoma wind farm will hurt ratepayers. That is a common complaint with other wind energy projects. In addition, it is usual for neighbors to fight the construction of windmills near their homes or businesses.

There is also controversy over these projects because politicians have given wind energy producers a pretty sweet deal. From the federal production tax credit (PTC) to state subsidies and renewable energy mandates, it is nearly certain that the wind energy industry would not exist without government support. As is the case with every other government subsidy, this has distorted the energy market in ways both seen and unseen.

A detailed article in the Cato Institute’s Regulation magazine examined the various problems with wind energy and the subsidies that prop it up. That article concludes:

After 35 years of direct and indirect subsidies, there is no economic rationale for continued subsidization of wind generation. At the federal level, direct subsidies such as the federal PTC should be ended immediately. Similarly, state-level subsidies, whether feed-in tariffs established by state regulators or statutory RPS mandates, exacerbate market distortions and raise electricity prices, again to the detriment of consumers. These state subsidies should also be eliminated. Ultimately, continued subsidization of wind generation simply rewards a few niche generation companies and their suppliers, at the expense of the many. Given the massive federal debt and anemic U.S. economic recovery, this type of pernicious wealth redistribution cannot be justified.

There are differing opinions on the affordability of wind energy, however. According to Peter Main, a SWEPCO spokesman, “Wind energy does not have a fuel cost. Wind is free. So when you take cost of construction and the project, and you offset that by lower fuel costs across our entire company that’s the benefit to the customers.”
That may be true. The industry may have matured beyond the need for subsidies, as some proponents argue. If so, then what justification still exists for subsidies? If energy production from wind can compete with energy production from other sources, then subsidies simply provide a windfall (so to speak) from the taxpayer to utility owners. According to one source, wind energy has received a total of $176 billion in subsidies. These come in the form of grants, tax credits, and guaranteed loans at the state and federal level.

Eliminating these subsidies will certainly save taxpayer dollars. Doing so will also likely save energy consumers money, too. If Peter Main is correct, wind energy can survive without them. If that is the case, then market forces will sort out the issues currently at play in the debate over the SWEPCO wind farm in Oklahoma.