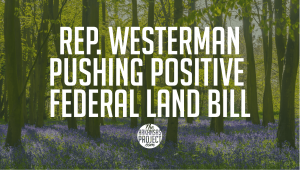 The federal government owns a lot of land – roughly 640 million acres. That is 28% of the total area of the United States. With that huge amount of land comes a lot of maintenance needs that are going unmet. There is cause for hope that this policy of obtaining land while ignoring maintenance may soon be remedied. A bill introduced by Rep. Bruce Westerman could help fix federal policies that have led to this maintenance backlog.

Rep. Westerman has introduced HR 5170, the Federal Lands Investment Partnership, to reauthorize the Land and Water Conservation Fund (LWCF). This is a fund set up to preserve and acquire land that promotes outdoor recreation. The LWCF is in dire need of reform, and Rep. Westerman’s bill would go a long way towards improving how money is spent under this program.

As the image below shows (credit to the Property and Environment Research Center for creating it), the bulk of LWCF funds goes towards federal land acquisition.

As noted above, the federal government already owns quite a bit of land. While it is good at obtaining new land, it does not do very well in maintaining the land it has. This acquisition of new land has also squeezed out dollars provided for states to use for public land access purposes.

Under Rep. Westerman’s bill, states would be guaranteed 25% of the money appropriated under this fund. That would be a significant increase from the LWCF funding trend since 1970s, where states receive 13% of funding. Forty percent of funding under this proposal would go to federal purposes, with 75% of that being required to be used for “for deferred maintenance, critical infrastructure, visitor services, and clean-up efforts.” Fifteen percent of funds would go to promote offshore energy education and innovation (LWCF funds are tied to royalties obtained from offshore energy development, so this makes sense).

Re-directing funding from land acquisition to maintenance is a much-needed change in federal lands policy. As the Property and Environment Research Center notes:

The magnitude of the unfunded needs on current federal lands is staggering. The National Park Service alone has a deferred maintenance backlog of nearly $12 billion. Yellowstone and Yosemite, two of the most iconic parks, each face more than half a billion dollars in unmet maintenance needs. Overall, the total deferred maintenance backlog across all federal land agencies amounts to approximately $18.9 billion. This backlog includes the wastewater system repairs, campground and trail maintenance, building repairs, and transportation infrastructure necessary for people to access and enjoy public lands.

It makes a lot of sense for the federal government to deal with the backlog of maintenance issues rather than acquire new land. Rep. Westerman deserves credit for this commonsense reform proposal for the LWCF. If it can become law, it will address at least one of the problems that currently exists with federal lands policy.