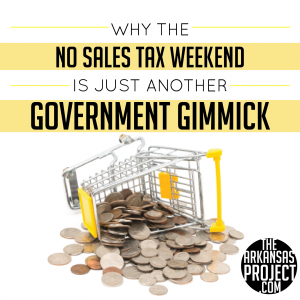 All tax reductions aren’t created equal — and nowhere is this more evident than in this weekend’s annual sales tax holiday.
Because of tax changes passed in 2011, some purchases of clothing and school supplies will be free from taxation on Saturday and Sunday.
Many politicians in the middle of campaign season take the week before this holiday as a chance to boast about their tax-cutting bonafides.
However, this temporary tax respite leaves a lot to be desired when it comes to fostering economic growth and job creation — which should be a central goal of tax policy.
The Tax Foundation panned sales tax holidays in a 2013 report, saying:

Sales tax holidays do not promote economic growth or significantly increase consumer purchases; the evidence shows that they simply shift the timing of purchases. Some retailers raise prices during the holiday, reducing consumer savings.
Sales tax holidays create complexities for tax code compliance, efficient labor allocation, and inventory management. However, free advertising for what is effectively a paltry 4 to 7 percent sale leads many larger businesses to lobby for the holidays.
Most sales tax holidays involve politicians picking products and industries to favor with exemptions, arbitrarily discriminating between products and across time, and distorting consumer decisions.
While sales taxes are somewhat regressive, this is often exaggerated to sell the idea that sales tax holidays are an effective way of providing relief to the poor. To give a small amount of tax savings to low-income individuals, holidays give a large amount to others.
Political gimmicks like sales tax holidays distract policymakers and taxpayers from genuine, permanent tax relief. If a state must offer a “holiday” from its tax system, it is a sign that the state’s tax system is uncompetitive. If policymakers want to save money for consumers, then they should cut the sales tax rate year-round.

The Advance Arkansas Institute recommended in a paper in 2011 that lawmakers should focus on lowering rates year-round — and getting rid of most of the special exemptions (like the sales tax holiday) that lawmakers have written into the state tax code.
AAI’s recommendation was backed up by a recent report, which found that these sales tax holidays, credits, and exemptions lead to a smaller tax base for Arkansas — which creates the danger of lawmakers using a small tax base as a justification for higher taxes.
William Freeland, an ALEC research analyst who worked on the report, told The Arkansas Project last week:

Let’s say a state needs to hit revenue figure X. The fewer the people that are in the tax base, the higher the rate has to go on everyone else.

That’s a fancy way of saying that Arkansans shouldn’t tolerate a 363-day high-tax hangover just so politicians can boast about giving their constituents a two-day sales-tax holiday.