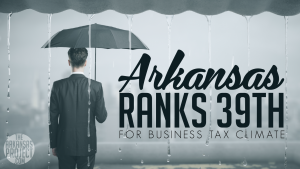 Arkansas’s business tax climate ranks among the worst in the nation for yet another year, according to a new study by the Tax Foundation.

According to the  2018 State Business Tax Climate survey, Arkansas’s business-friendliness dropped one spot from the previous year — we’re now 39th in the nation.

Arkansas legislators received praise for improving our tax code in 2017. However, the improvement apparently wasn’t significant enough to improve Arkansas’s ranking among other states.

Arkansas repealed its InvestArk investment tax credit, enhancing the neutrality of its corporate income tax. However, because the state still retained several smaller investment tax credits, the repeal of InvestArk alone does not improve Arkansas’s ranking on the Index. The state also removed repair parts (a business input) from the sales tax base, reducing tax pyramiding.

The legislature formed a Tax Reform and Relief Task Force in the 2017 session to study ways to improve the Natural State’s tax competitiveness. As this report shows, there’s plenty of room for improvement. The Task Force’s findings are due before the 2019 legislative session.

Arkansas’s competitiveness is particularly bad when it comes to its corporate and sales taxes, which rank 39th and 44th respectively.

Arkansas was the least competitive when compared to all of its neighboring states, with the exception of Louisiana.

You can read the full study here.