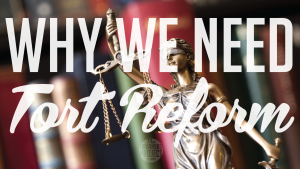 Readers of this blog have surely noticed that, in the past several days, I have summarized some of my interactions with Fort Smith trial lawyer Joey McCutchen. McCutchen has strong political views, and he’s enthusiastic about sharing them with others. He’s become energized about what he sees as the dangers of tort reform; when I started working with Health Care Access for Arkansans to advance tort reform, I became a target of his ire. In previous posts, I’ve had a little fun with the maladroit manner in which he argues for his views; however, what I want to do now is to argue for mine.

Joey McCutchen is right that the jury is an incredibly important institution, and that its decisions are entitled to great weight. He is wrong when he argues (as I think he does) that its power should be absolute. Like the rest of us, juries get it wrong sometimes; there are established mechanisms in the law, such as remittitur, for judges to correct juries when they become misinformed or inflamed (judges exercise remittitur when they reduce the dollar amount of a jury’s verdict when that verdict is unwarranted by the law). Some people believe that whatever any jury does is necessarily right; I think such an attitude is a profound misunderstanding of the American system of justice, in which different components of the system, each with limited powers (such as, for instance, judges and juries), sometimes cooperate and sometimes compete. The world view that says that juries should govern with absolute and unchecked power is certainly a profound misunderstanding of our common-law right to jury trials, which is what the Seventh Amendment was supposed to protect.

This is not just an abstract argument about the powers of government; it has real consequences for real people. I believe that the legal rules we have produce profound effects on the society we live in. Here is an example: look at what happened in Texas after it placed some limits on jury damage awards in 2003. The number of doctors in Texas doubled. The average malpractice insurance premium for doctors shrank by more than half. One of Arkansas’s biggest problems is its citizens’ lack of access to health care, and I think it would be wonderful if we could replicate Texas’s progress in this area. Ensuring that juries stick to their limited, constitutional role — and that they don’t harm the state’s health-care climate with excessive and unwarranted verdicts — is a wise public policy goal that makes citizens better off.

I appreciate that there are some people who think that any limit on a jury’s power is somehow unconstitutional. But those people are wrong. Legislatures routinely write laws that juries must abide by; judges issue instructions in every jury trial that juries must follow. As we’ve written about before, roughly 30 states have put laws on the books that regulate the power of juries to award non-economic damages. Perhaps those who arguing that these states are somehow violating the Constitution really believe that half the nation’s courts are operating in a

constitutional no-man’s-land. The correct view is different: in fact, the emergence of a couple of lawyers with extremist political views who presume to give us slanted lectures about the Constitution, while displaying (for instance) no understanding of the difference between the operation of the Seventh Amendment on state and federal courts, gives us no reason to take their groundless views about how juries are supposed to work seriously.

And, obviously, there’s more than dueling political views at stake here. The proper role of the jury is more than just an abstract matter to Joey McCutchen: he recently made a donation of $100,000.00 to the committee fighting the tort-reform initiative. But despite McCutchen’s strong political (and economic) interest in these questions, his arguments that he is defending the Constitution by resisting tort reform don’t make much more sense than the pretend lawyers who argue that courts with gold-fringed flags can’t exercise jurisdiction over taxpayers. These kind of arguments don’t establish anything besides demonstrating that their advocates don’t really understand how the legal system works, and the deployment of such arguments reflects poorly on any lawyer – given that part of any lawyer’s job is to educate the public on the workings of our legal system. In short, I appreciate that Joey McCutchen makes his living inflaming juries, but surely we are entitled to ask for some degree of accuracy in any discussion about changing our Constitution.

One of the most important and fundamental rights of Arkansans is the right to amend our state Constitution by popular vote. This November, Arkansans were denied the right to decide whether we want to continue running medical professionals out of the state, or whether we want to encourage them to practice the healing arts in Arkansas. The Supreme Court took the matter out of voters’ hands, based on what many observers thought were indefensible reasons. I hope that, someday, Arkansans will have the right to opt for more health care access in the Natural State.