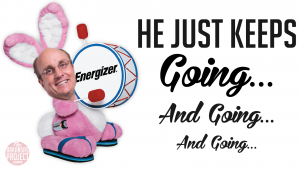 As you will recall, I have been writing about the email correspondence I involuntarily receive every now and then from trial lawyer Joey McCutcheon.

To summarize my previous post: McCutchen has a highly unusual legal mind, which he previously demonstrated by sending an elaborate Freedom of Information Act (FOIA) request to a party (the Attorney General) who had no obligation to fulfil it. The average lawyer, when realizing that he has made an embarrassing legal error like this, will step back and craft a different strategy. Not so for McCutchen, though: when his incompetence is revealed, his response is to double down. The not-exactly-razor-sharp brilliance of that strategy was revealed when, after being informed that his first FOIA request made no sense, McCutchen sent me a second FOIA request which demanded the records of a private party (namely, me). It was at this point that I began to suspect that McCutchen was either uninterested or incapable of anything like intelligent discussion, and I therefore decided it might be wiser to give him the last word and not reply.

What I learned, though, is that when you don’t reply to Joey McCutchen, it seems to encourage him to keep corresponding with you. Ninety minutes after I decided not to respond, I got another breathless email from him:

Please explain what you mean when you say “ There is no 7th Amendment right that is affected by regulation of damage awards” (… I do understand the “competent lawyer” part.)

I answered him back, as can be seen immediately below (non-lawyers may find my explanation of remittitur yesterday to be of interest):

Come on, Joey, you know what a remittitur ruling is, right? In response to an excessive damage award? Surely you know that this is a widespread practice that occurs in all 50 states and at the federal level. Do you think remittitur threatens 7th Amendment rights?

In his subsequent response, Joey McCutchen succeeded in teaching me an important lesson: namely, it’s a mistake to think that you can have an intelligent conversation with Joey McCutchen. If you are a person of moderate intellect and social skills, once you ask a question and receive an answer, you might then try to continue the conversation about that subject, especially when it contains a question that has, in response, been posed to you. But not if you’re Joey McCutchen, for whom the boring and pedestrian habits of normal people are best ignored. If you’re Joey McCutchen, your job is to appeal to your own authority, to ignore the law, and to continue making groundless legal arguments — such as repeatedly demanding private papers from private parties under the Freedom of Information Act. In his response to me, McCutchen completely ignored the question of remittitur; here is his entire reply to my question:

Yes Dan. I’ve actually been representing people for 25 years or so, not just operating in some think tank trying to take away the rights of everyday Arkansans. I’m still waiting on your donor list, if in fact it is not dark money. I’m also waiting on correspondence between you and the AG.

At this point, I was approaching the limits of my tolerance. I emailed back:

Joey, how is this remotely responsive to my email?

McCutchen responded with an email full of insults about my personal affairs that had nothing to do with remittitur, the power of juries, or the Seventh Amendment. At this point, I decided to end our correspondence irrevocably:

I am sorry to bring you some bad news. Apparently, some idiot has acquired access to your email account and has decided to sign your name to several incredibly stupid emails.

I hope that you are able to solve this problem, at least to the extent it is possible.

Regrettably, this was not enough to deter McCutchen, who (as perhaps has become apparent) is the Energizer Bunny of correspondents. Even this latest attempt at finality was apparently too subtle to deter him from writing me, and writing me, and writing me again. A few days after he “responded” to my email, he then reiterated his FOIA request to me — apparently because he still couldn’t quite grasp that FOIA does not generally apply to the records of private parties — and added that he planned to start driving around the state and speak to groups about tort reform. I then made the mistake of replying at some length:

Your note yesterday surprised me a little, especially the part about how you planned to send the attorney general a second FOIA request asking for additional correspondence. Did you not learn anything from the consequences of your illiterate stunt the first time? As I told you just a few days ago, under FOIA the attorney general is not required to supply copies of her correspondence with the public. Similarly, someone who claims to have practiced law for a quarter-century runs the risk of looking as if he hasn’t learned a damn thing from the experience when he sends me a letter demanding material that is protected by the attorney-client privilege.

I admit that I am intrigued to hear that you will be speaking to other people about your exotic and groundless understanding of the Seventh Amendment. If it pleases you, I will be happy to appear simultaneously with you anytime and provide a counterpoint. I remember the last time we both appeared before an audience. Several members of that audience told me immediately afterwards that they were highly unimpressed with your use of forged documents that evening which purported to represent a pending legislative proposal. Perhaps you have come up with more persuasive arguments since then, although I doubt it.

As real lawyers know, the Seventh Amendment is entirely consistent with placing some limits on non-measurable damages — just as the Second Amendment is consistent with prohibiting private citizens from owning nuclear bombs, and the First Amendment is consistent with prohibiting libel. Just to give you an example of what I mean by “libel,” I imagine it would be prohibited, for instance, for me to state that your father has an extensive history of criminal conduct. Of course, it would not be prohibited for me to explain that your father is a racist, an anti-Semite, a liar, and an all-around terrible person. My family and I have put up with his toxic nuisance letters for years. Perhaps it is unfair to assume that you have inherited all of his crackpot views, but it is clear to me that you have acquired more than enough of your own.

But McCutchen never realized what is obvious to the rest of us: namely, a person who is so committed to his political views that he thinks it is a waste of time to defend them when they are challenged runs the risk of being an uninteresting correspondent. He persisted in sending me many more emails that had nothing to do with the question of how juries, or the Seventh Amendment, worked, but had everything to do with his groundless political views. After several more emails from him, I gave up and sent him a kiss-off note:

Please don’t contact me anymore. I have plenty of friends of varying political persuasions who I have polite disagreements with, but you and the rest of the McCutchens don’t seem to understand how the whole “polite disagreement” phenomenon works. And you are so inadequate to and inept at making a case for your own point of view that even “impolite disagreement” with you is no fun at all.

The next day, he responded:

I will honor your request re not contacting you. But understand I do not come to you as ” a friend of of varying persuasions.” The bottom is that your actions strongly suggest that you are an “enemy of Liberty.” I suspect you have have never represented a quadriplegic victim of a Ford/ Firestone rollover, a 10 year old rape victim who was a passenger in a non-profit van, or a developmentally disabled man who was starved to death by a service provider’s employee who was not supervised …

McCutchen ended his note by informing me that he planned to send yet another FOIA request to the attorney general. (Because that commitment demonstrated, once again, that he doesn’t understand how FOIA works, it was perhaps not quite as ominous as he had hoped.) I didn’t respond to his barrage of criticisms and insults. I haven’t emailed him since then. Enough is enough.

And then, of course, to demonstrate his own unique fidelity to his own principles – and, in particular, his fidelity to his statement that he would not contact me again — McCutchen then emailed me out of the blue, yammering about his own mistaken understanding of the Seventh Amendment, four more times: once in late April, once in late May, once in late June, and once again in late July. (I am pleased to report that he was apparently on vacation in August.) Perhaps the timing had something to do with the phases of the moon. You, the reader, probably would have stopped responding to him several iterations ago – and perhaps you will be pleased to hear that I finally wised up and decided to avoid responding to him directly. Better late than never, I suppose.

Next: the long-awaited CONCLUSION, in which I discuss why I am not an “enemy of liberty.”