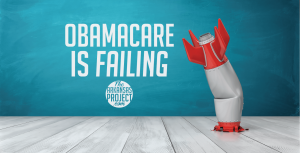 Why do people say that Obamacare won on Election Day? One reason is that three conservative states expanded Medicaid to conform to what Obamacare initially mandated. Another is that voters replaced many Obamacare opponents with Obamacare supporters. With these results, Republicans in Congress have no choice but to give up on a repeal-and-replace plan for Obamacare.

So the Affordable Care Act may be with us for years to come – if the health care sector can sustain the problems it is causing for millions of Americans.

Through Medicaid expansion and subsidies, Obamacare has certainly helped some low-income Americans gain access to health insurance or improve the health care coverage that they had pre-Obamacare. But this has come at a price, literally. The cost of Medicaid expansion and the subsidies is unsustainable in the long-run. In addition, the cost of health insurance for middle-income Americans is increasing due to the distortions that Obamacare has inflicted upon the marketplace.

On the distortion in the health insurance marketplace, consider these numbers from health care consultant Bob Laszewski:

In March of 2016 there were 7,520,939 people covered in the off-exchange individual health insurance market where subsidies are not available.

Why are these numbers dropping? Consider the cost of individual market policies (these may be for Northern Virginia, but the trend is occurring nationwide):

In Northern Virginia, for example, the cheapest 2019 Obamacare individual market Silver plan for a family of four (mom and dad age-40) making a subsidy eligible $65,000 a year costs $4,514. That plan has a $6,500 deductible meaning the family would have to spend $11,014 on eligible health care costs before collecting other than nominal first dollar benefits.

That same family, but making too much for a subsidy, as 40% of families do, and a typical family in the affluent Virginia 10th, would have to spend $19,484 in premiums plus a $6,500 deductible, for a total of $25,984 in eligible costs before they would collect any meaningful benefits.

Middle-income Americans (those who do not qualify for subsidies) have seen inexorably rising health insurance prices. As a report from the Heritage Foundation notes, “Between 2013 and 2017, premiums increased by 105 percent. Today, for many middle-class persons, such high-cost coverage is practically inaccessible.”

Sooner or later, these millions of affected individuals will be calling to reform health care, and they will be impossible to ignore. Members of Congress will need to have a plan to fix these problems. For those on the liberal side of the ideological spectrum, the answer will be “Medicare for All” or some other form of single-payer health care. What about conservatives? Tomorrow I will look at an intriguing plan that has some potential to provide truly pro-consumer health care reform.