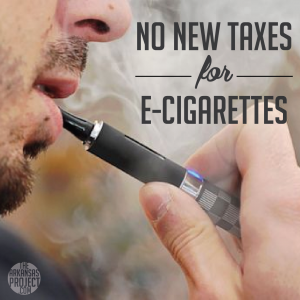 One of the most positive policy results to come out of the Arkansas legislative session earlier this year was the avoidance of a burdensome new tax on e-cigarette users.
It was clear from the beginning of the session that legislators were going to place some type of new regulation and/or tax on the e-cigarette (or “vaping”) industry in Arkansas.
As we’ve noted previously, bureaucrats in states across the nation are generally in favor of high taxes on the e-cigarette industry, because it’s a new source of revenue that can be used to fill the state’s coffers. The tobacco industry also likes taxes on e-cigarettes, because they see vaping as competing with their already declining customer base.
Legislators this session had a few choices about e-cigarettes:

Luckily, the Legislature proceeded with the latter option. To be sure, this bill still requires e-cigarette sellers to pay some fees and purchase some permits which aren’t inexpensive, but e-cigarette vendors dodged a bullet this session — by avoiding a new broad and burdensome tax placed on their industry.
This is a good thing, because it appears that e-cigarettes are providing a healthier alternative to cigarette smoking as well as a route to help Arkansans quit smoking.
As a recent study from BioMed Central states:

Although there is no doubt that smokers switching to electronic cigarettes (EC) substantially reduce the risk to their health, some tobacco control activists and health organisations discourage smokers from using EC and lobby policy makers to reduce EC use by draconian regulation.
The hostility to EC may be related to a moral belief that nicotine use should be eradicated rather than allowed to morph into a relatively harmless activity. If EC are allowed to compete with cigarettes and develop further, smoking is likely to all but disappear. Discouraging smokers from making the switch and reducing EC competitiveness with cigarettes by unwarranted regulation will delay this opportunity or squander it altogether.
In fact, there is now sufficient evidence available for health professionals to recommend to smokers who cannot stop smoking with existing treatments or do not want to do so, to try several types of e-cigarettes to see if they can find one meeting their needs.

Approximately 400,000 Americans die per year from diseases related to conventional cigarette use (including fires, heart disease, and an array of cancers — not just lung cancer). No Americans are known to die from vaping.
Thus, the e-cigarette (vaping) industry has the potential to bring about a healthier citizenry. It is an industry that shouldn’t be viewed as just another potential target of taxation.
In short: the legislators of the 2015 General Assembly avoided the temptation to create a new tax. We hope this won’t change anytime soon.