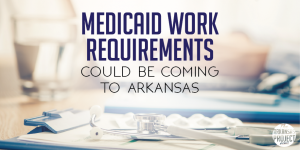 Governor Hutchinson has made it clear that he wants a work requirement for able-bodied Medicaid recipients. It appears that President Trump is on the verge of granting the governor his wish.

When he supported expanding Medicaid as allowed under Obamacare, Gov. Hutchinson asked the federal government for a few tweaks to the program. One of the modifications requested was a requirement that non-disabled adults should face a work requirement along the lines required for receiving SNAP benefits. Under the Obama Administration, this type of requirement would have gone nowhere. Under President Trump, however, such conditions are likely to be approved.

While an overall Medicaid expansion is something that appears to be unwise for a variety of reasons, a work requirement could have some benefits. Here is what Naomi Lopez Bauman of the Goldwater Institute has to say about this new move from the Trump Administration:

There are approximately 25 million non-elderly, non-disabled adults receiving Medicaid benefits at any given time. Of those, about 60 percent are currently working. But given the many activities that qualify as work and community engagement, the majority of the remaining 10 million who are not currently working are either already engaged in a qualifying activity or would not be required to do so.

Even though the impact of this guidance will be limited, it is important because it is the first time in almost a decade that an administration is openly encouraging state Medicaid innovation and reform. In particular, this guidance recognizes the need for flexibility both for states and work/community engagement activities in order to move Medicaid closer to what it was originally conceived to be—a safety net for the truly needy, not a trap for the able-bodied.

State flexibility to pursue work and community engagement activities in their respective Medicaid programs is, hopefully, the first of many steps that will allow—and encourage—states to re-imagine Medicaid to reflect and meet their own state’s needs.

A work requirement will not make Arkansas Works a paragon of fiscal responsibility. It will not fix many of the long-term problems that face the Medicaid program. But it is a small step in the right direction. It will be interesting to see how it plays out in Arkansas if the Trump Administration does indeed give the state permission to try it.