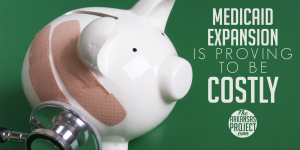 Governor Asa Hutchinson announced his budget for the upcoming fiscal year. Surprise! Medicaid is going to cost a lot more next year than it does in this year.

Actually, anyone who follows state budgets knows that this is no surprise at all. Medicaid spending tends to go in only one direction. This trend is not helped by the state’s decision to leap on the Obamacare bandwagon by expanding Medicaid through the Arkansas Works program.

The Democrat-Gazette reports the details:

The Medicaid program would get a $137.9 million increase, to $1.25 billion. That’s about $55 million less than what he originally planned to seek and results from a reduction in the Medicaid rolls, an improving economy and the department’s efficiency efforts, the governor said.

The proposed Medicaid spending includes a $48.6 million increase in state matching funds for the traditional Medicaid program, plus normal cost increases, Hutchinson said. The governor also proposes to shift one-time funding to permanent funding, and this adds $51.1 million…
The other proposed increase in Medicaid spending is from a $35.7 million increase in state funds for the expansion known as Arkansas Works, Hutchinson said. The state’s share of the program was 5 percent last year and is 6 percent this year and will be 7 percent next year, state officials said.

According to the governor, ending this Medicaid expansion would actually cost the state money:

Ending the program as advocated by some would shift a higher percent of healthcare costs to the state. In contrast to ending Arkansas Works, we are managing the program so that only those who are income qualified are receiving benefits. This improved management and a strong economy has resulted in 58,000 people moving off Arkansas Works last year. This saves us money and that is a good thing. The distinction is clear.

To the extent that the state works with people to move them onto private insurance and off Medicaid, I have no quibble. Without Arkansas Works, however, these recipients would have a much bigger incentive to find private insurance, since they would not have a free alternative in the state’s Medicaid system. There is ample evidence that Medicaid acts as a disincentive to work. From a fiscal standpoint, it is perplexing to think that keeping place a program that is growing more expensive year-after-year is somehow saving the state money.

To be fair, the article points out that the increase in Medicaid spending is not as high as originally projected. Containing enrollment numbers is not only good for the budget, but also good for Arkansans who have access to better insurance options than Medicaid. But the per-person cost on Medicaid remains the same. An economic downturn (or a governor who wants to discontinue efforts to move Medicaid recipients off the rolls) will mean even higher costs for the state’s taxpayers in the long run.

Given the Trump Administration’s hostility to Obamacare, Arkansas has an opportunity to pursue better health care reforms than the warmed-over Medicaid expansion that is Arkansas Works. Without reform, the overall cost of Medicaid will continue to grow as will the cost of providing coverage to the population enrolled in Arkansas Works. State policymakers should take advantage of the new openness in DC to freeing states of Obamacare’s burdens and revisit whether Arkansas Works should continue at all.