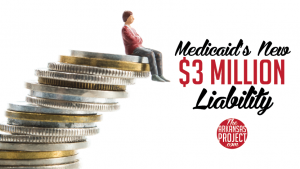 On the basis of our sample results, we estimated that Arkansas improperly received at least $7.1 million in additional Federal share, of which we will recommend recovery of approximately $3 million.

OIG could have been much more aggressive in trying to reclaim money from Arkansas Medicaid. OIG requested recoupment only of the smaller recoverable amount, not the total amount that Arkansas improperly received. Only some of the improper payments are considered recoverable in 2017. The estimated total dollar amount of improper payments is $11 million, while only $3.7 million is considered recoverable by OIG. OIG then arrived at a conservative estimate of $2.8 million. According to OIG statistical analysis, there is a 95% chance that Arkansas Medicaid improperly received more than this amount from the federal government. But OIG is willing to settle for a conservative loss estimate when recouping these federal funds.
DHS has already agreed to repay the $3 million federal loss identified by the OIG report. DHS Deputy Director Dawn Stehle signed a letter agreeing to pay the money back to the federal government on August 11, 2017.  This $3 million repayment to the federal government does not appear on the legislature’s Claims Commission agenda for this year. These recoupments may lie outside of the Claims Commission’s authority.
DHS may want to recoup some of the missing funds from providers. Providers were allowed to self-determine whether or not they were eligible for the payments. Federal regulations allowed such self-determination.  However, 16 of the 120 providers sampled, or 13%, were not eligible to receive the supplemental payments. Other cases of payment error, however, were caused by DHS itself, due to calculation errors or to medical coding errors.
It will be interesting to see if DHS recoups payments or asks taxpayers for additional money in order to cover the cost of its mistakes. These federal repayments do not go through the ALC Claims Commission, although these payment requests seem similar to other issues before that legislative committee. We asked Amy Webb of DHS about this question; we’ll update the blog if and when she gets back to us.