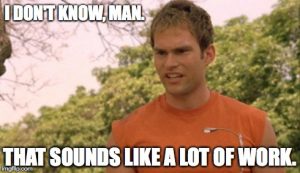 Washington County Circuit Judge Doug Martin dropped the ball the other day when interpreting Arkansas’s Freedom of Information Act. On Wednesday, he erroneously ruled against a citizen, Wade Cash: Cash had made a FOIA request for several years’ worth of emails from two employees (and former co-workers) at the University of Arkansas.
The foundation of Judge Martin’s decision was that the requestor asked for too much public information. Obviously, we can’t have that.
Regrettably, Judge Martin failed to read the law correctly. The statute provides that “the request shall be sufficiently specific to enable the custodian to locate the records with reasonable effort.” That means that a FOIA request needs to be written so that it is easy for a government official to determine what documents are being sought. Judge Martin was apparently under the mistaken impression that our FOIA only supports information requests that are easy for the government to carry out. That is a mistaken reading of the statute. To put it another way, if a FOIA requestor asks for information that creates a lot of work for the government, the law does not actually recognize it when the government responds with a Steve Stifler defense.
Judge Martin said he couldn’t find many cases to help him; nonetheless, he should have considered looking at some germane attorney general’s opinions. In a 2000 opinion, then-Attorney General Mark Pryor wrote that “it may be that a search for the requested documents will take some time (such as where a voluminous amount of records has been requested and yet the records are not considered to be ‘in storage’ for purposes of 25-19-105(e)) or that it is necessary for the custodian to review the records (perhaps in consultation with legal counsel) in order to determine if there is any exempt information contained therein which must be excised prior to disclosure.” What that means is that some requests will create enough work for the government so that extra time might be required to fulfill them. It certainly doesn’t mean that the workload that is required by the request creates a reason to deny it.
One of our state’s experts on the FOIA, Professor of Law and Fulbright Scholar Robert Steinbuch, agrees: “The judge really botched this one. I hope the plaintiff appeals, because the appellate court will overturn this mess in a heartbeat.”
Notably, in a letter from an associate general counsel for the University of Arkansas, the University said it was willing to provide the material after all if the requestor coughed up $6,757.50. What that means is that the school could provide the documents – as long as it’s paid even more money to do the job that it’s already paid to do. In other words, it’s clear that the requestor has answered the relevant question – namely, he’s identified the documents he’s asked for – which is to say: at that point, it’s the government’s job to carry out the request, not to complain about the work it is required to do.
Indeed, it’s clear that the Arkansas Freedom of Information Act doesn’t allow the government to charge the public for doing its job – namely, providing access to public documents. (Larry Jegley could probably explain this to Judge Martin, if necessary.) Can Judge Martin really think that since the legislature said that agencies couldn’t charge for FOIA requests, agencies could therefore simply refuse to comply? That is a mistaken reading of the law.
In a Clintonesque twist, the University employees apparently didn’t use their official email accounts; rather, they chose to have their messages automatically forwarded to their private Gmail accounts. This mixture of public and private matters apparently produced even more records to review. One might infer from Judge Martin’s ruling that the more government employees jumble their emails, the more they can therefore hide them from the public. This decision sends a disturbing message to government workers: “Become even less efficient: that will allow you to dodge public oversight!”
David Curran, a deputy Arkansas attorney general, explained to the court that it needed to consider the interest that public agencies have in “operating efficiently.” I think that’s groundless: when basic rights are at issue, the government does not score any points by efficiently ignoring them. I appreciate that the attorney general’s job is to defend other state government offices in court, but presumably that defense should be based on the law. I certainly hope that Leslie Rutledge’s army of lawyers are, at least in private, explaining to their clients that they must follow the law. That would be a vast improvement over what they’re doing in public (which, as far as I can tell, consists of arguing in court that the government only has to obey the law if it isn’t too much of an inconvenience). But based on Curran’s eyebrow-raising argument, I worry that they’re not even correctly advising the University in private.