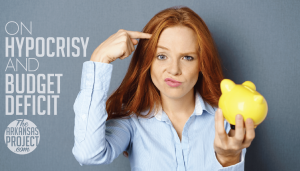 Bruce Westerman a hypocrite for supporting tax cuts and opposing spending increases?
I think this is absurd, but that is the charge made by Chris Cannon in a letter to the Sentinel-Record. It appears to me that Cannon is not familiar with what “hypocrisy” means, is ignorant of how federal spending works, or is just looking for any excuse to attack Rep. Westerman.

The budget deficit is the difference between what the federal government collects in revenue versus what it spends. To close the deficit, you can either increase revenue collection (hike taxes, in other words), cut spending, or do both.

It’s true that Rep. Westerman, and most other Republicans in Congress, supported legislation that cut taxes. This measure could add roughly $1 trillion to the deficit over the next decade. However, if this tax cut is matched by spending decreases (or decreases in the projected rate of growth), it will not add to the deficit. If Congress and the president limit spending over the next 10 years so that spending cuts or spending growth decreases exceed $1 trillion, then the deficit will decrease.

It’s obviously harder to close the deficit by reducing government revenue and then focusing on spending decreases. But it is certainly possible to do that. As Chris Edwards of the Cato Institute points out in a blog post analyzing last year’s tax bill, spending is what’s driving the deficit:

Even with the [Joint Committee on Taxation’s] lowballed growth estimates, projections show that spending restraint is the key to deficit reduction. Rather than adding tax increases, deficit worriers in the Senate should work to replace no-growth provisions in the tax bill, such as child credits, with pro-growth provisions, such as further rate cuts. And rather than holding up the tax bill, they should redouble their efforts in the new year to cut discretionary spending and reform entitlement programs.

Of course, Congress did not focus this year on cutting discretionary spending and reforming entitlement programs. Instead, they put together a recent bipartisan agreement that ended a brief government shutdown but paved the way for an additional $320 billion to the deficit over two years. This is what Rep. Westerman voted against, which is what you’d expect for someone who is truly concerned about the deficit.

Here is what Cannon said happened when he asked Rep. Westerman about his alleged hypocrisy: “He believes that rather than adding to the debt, the tax cuts will pay for themselves by spurring enough economic growth.”
Since I wasn’t at the event with Cannon and Rep. Westerman, I don’t know if that’s an accurate summary of Rep. Westerman’s comments. If it is, then Rep. Westerman is wrong. Some tax cuts can pay for themselves, but it’s a very complex issue. These are cuts in high tax rates that discourage economic growth. The tax bill passed by Congress, in general, did not do this. It had some pro-growth measures, such as a much-needed corporate income tax cut, but it also had provisions such as an expanded child tax credit. There may be good policy reasons to increase the child tax credit, but there is no serious contention that this is a provision that will stimulate economic growth. I support tax cuts, but the idea that tax cuts always “pay for themselves” Is a canard that needs to die.

That being said, it’s also possible that Rep. Westerman said that tax cuts would stimulate economic growth and that growth would partially offset the deficit effects.

That much is true. A $1.5 billion tax cut will not lead to $1.5 billion in reduced government revenue. Depending on the types of taxes cut, new economic activity will result that will produce increased tax revenue. Acknowledging this fact is not the same as saying “tax cuts pay for themselves.”
It is fair to criticize a member of Congress who expresses concern about deficits but voted for both the tax cut package and the spending increase proposal. However, it is not fair to criticize someone who is concerned about the deficit if that person supported tax cuts but not spending increases.  Someone can reasonably think that deficit reduction should come from cutting spending, not hiking taxes. Someone else may disagree with that belief, but that is a policy disagreement, not an example of hypocrisy.

Any attacks on the Arkansas delegation for being hypocrites on the budget should not be aimed at Rep. Westerman, the only member of the state’s delegation to vote against the agreement that will lead to a huge jump in federal spending.