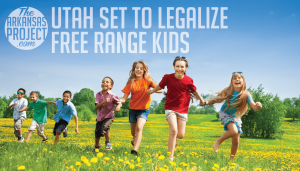 “Free Range” parenting is likely to be legal soon in Utah. It’s time for Arkansas to follow suit.

What is “free range” parenting? It’s what used to be called, simply, “parenting.” That is, giving your children freedom to grow and experience the world without a parent hovering over them, watching their every move.

Lenore Skenazy started a blog called Free Range Kids and now has an organization called Let Grow. She wrote an op-ed recently about the Utah bill that explains what it does:

Giving our kids an old-fashioned childhood is not negligence. It should never be considered that. I asked Adrian Moore, a policy expert at the Reason Foundation, to help me draft a law that stated — in a lot more words — “Our kids have the right to some unsupervised time, and parents have the right to give it to them without getting arrested.” As Moore put it, “There are some bureaucrats who think that it’s not safe for kids to do anything other than play in their rooms. That’s crazy. But without a law sometimes the crazies get to decide.”

If this sounds familiar, that’s because Arkansas legislators considered similar legislation last year. As Skenazy points out, that bill was derailed by unfounded concerns:

The Arkansas legislature was the first state to vote on this bill a year ago. It sailed through the Senate but hit a wall in the House, stymied by the all-too-familiar fear: What if a child gets kidnapped? The specter of this rarest of crimes (people are more likely to be hit by lightning than be kidnapped) was enough to trigger the backlash.

Ironically, crime-wise, kids today are safer than when their parents were growing up and zooming around (helmet-free) on bikes. The crime rate today is back to what it was in about 1967. And it’s not down because we “helicopter” kids — crime against adults is down too and we don’t helicopter them. It just doesn’t feel as safe today, thanks to the 24-hour news cycle and all the other likely suspects: A litigious culture. Safety-obsessed society. An industry that has given us little teddy bear monitors you can clip on your kid that start beeping if they stray from your side.

AAI’s former president Dan Greenberg has explained why Arkansas needs a bill like the one recently passed in Utah. He has also described in detail the absurd reasons that legislators put forward when killing the bill last year.

Sen. Alan Clark, who introduced Arkansas’s free range kids bill last year, expressed his disappointment to TAP that Utah, not Arkansas, is the first state to enact such legislation:

I hate it that Utah is ahead of us in recognizing the importance of parents’ rights to raise their own children. Hopefully those who claim to care about children will recognize that when we help parents, we help children. Parents should not live in fear of government agencies.

It appears that Utah’s lawmakers think a little more rationally about child safety and child freedom than do Arkansas legislators. The Utah bill passed unanimously in both houses of their legislature. It did not run into legislators who made up statistics about carjacking to justify their opposition to this commonsense proposal. All that stands in the way of this bill becoming law in that state is for the governor to sign it (which he probably will). Maybe Arkansas legislators can learn from their colleagues in the West. The state’s children and parents would be in a better legal situation if they did.