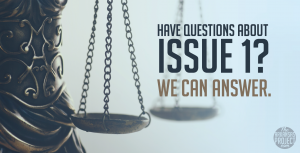 As November 6 approaches, a lot of people have questions about Issue 1, the tort reform amendment. The biggest question is whether or not the voters of Arkansas will have a chance to say “yes” or “no” to tort reform. The Supreme Court of Arkansas will have to answer that question. There are other questions that have come up about this ballot measure, however. What is tort reform? How does it affect health care? What are non-economic damages and how does tort reform affect them? Does Issue 1 put a price on human life? What is the pro-life stance on this issue?

To help answer these and other questions, AAI has published a new paper, “Twenty Questions (and Answers) about Issue 1 and Tort Reform.” As I explain in the introduction to that paper:

The debate over lawsuit reform has energized both its friends and its foes; regrettably, in their attempts to defeat Issue 1, opponents of lawsuit reform have been spreading deceptive and false information about what this ballot measure would do. To help clear up any confusion, here are some frequently asked questions about lawsuit reform along with short, accurate answers.

If the Supreme Court follows precedent, it is likely to allow the votes for issue 1 to be counted. That means it is vital for every Arkansas voter to become educated on what this constitutional amendment would and would not do. Please read the Q&A paper on Issue 1. Share it with your friends. Become an informed voter on exactly what Issue 1 would do. It is vitally important for the future of the state.