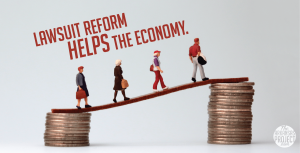 There are a lot of angles that lawyers are using to attack Issue 1. The opponents of this ballot issue are throwing all kinds of dirt at it, hoping at least some of the dirt sticks. I think that’s because they want to confuse voters, hoping that Arkansans don’t look at all the ways the state would benefit from lawsuit reform. They don’t want voters to consider, for instance, the economic growth that this reform could spur.

One person who isn’t confused about this issue is Randy Zook. It makes sense that he would think clearly about Issue 1’s economic benefits since he is the president/CEO of the Arkansas State Chamber of Commerce/Associated Industries of Arkansas. It’s his job to advocate for policies that would benefit the state’s business owners. One of those policies is lawsuit reform.

Zook recently wrote an op-ed for the Democrat-Gazette that lays out a few reasons to support Issue 1. He begins by pointing out a big problem with the current tort system:

Today, trial lawyers are incentivized to pursue “jackpot justice” verdicts by exploiting injury victims and their families in the pursuit of million-dollar paydays and taking as much as 50 percent of a settlement or award. Without limits on the amount of an award trial lawyers can receive, our current system results in the actual victims receiving less and less. It also incentivizes lawyers to file more and more cases, harming our economy by impacting business recruitment and retention and limiting access to quality medical care.

If this happens, it will not only be better for clients, but it will be better for everyone (except unscrupulous lawyers). The economic impact can be big. Zook explains:

The impact that frivolous lawsuits have can be staggering to anyone who operates a business. According to national data by the American Medical Association, it costs approximately $140,000 to successfully defend against a malpractice claim. Even in cases when claims are ultimately dropped, businesses on average incur legal bills totaling $28,000. That’s a hefty price tag for any business, but for small businesses in particular it could be the difference between being in the black and being in the red.

I’d urge everyone to read the entire op-ed to learn why the Arkansas State Chamber of Commerce is backing Issue 1. Its effect on the state’s economy and health care sector could be substantial. Arkansas voters should be clear about what is at stake when (if?) they vote on this proposed constitutional amendment in November.