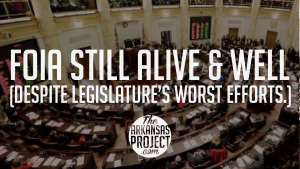 Is Arkansas’s Freedom of Information Act (FOIA) still in good shape after all the punishment it took from legislators this session?
A story in the Arkansas Democrat-Gazette yesterday details all of the changes to the state’s FOIA this session.

Before Arkansas lawmakers left Little Rock on Monday, they approved at least 10 amendments to the state’s 50-year-old Freedom of Information Act.

Three prevent the public from learning security information that has been available for years about agencies such as the State Capitol Police, public schools and universities, and the Governor’s Mansion.

Arkansas Freedom of Information Act experts and watchdogs say they worry how far the new secrecy will extend.

Security-records closures in some cases “were not bad ideas. Unfortunately, the bills went way too far by closing ‘records and other information,” said Arkansas Press Association Executive Director Tom Larimer.

That phrase could be broadly interpreted, he said, to include “just about anything” pertaining to the agencies. His group opposed all three bills.

Other laws passed include minor changes — like forming a task force to examine the FOIA, allowing government agencies to respond to requests by posting information online, and allowing a few privileged people access to water utility customer information.

In my view, the FOIA took some damage this session, but it wasn’t as bad as it could’ve been if other proposed anti-transparency bills had passed. I agree with Larimer that the security records exemptions were too broad, even though the intent behind the legislation was well-meaning.

In contrast to those changes that passed, two changes to the FOIA that died in the legislature this session were too broad — and arguably weren’t well-meaning.

Bob Johnson would’ve allowed government bureaucrats to choose their own deadline when responding to FOIA requests.

Currently, government officials responding to a request generally have three days to respond to a FOIA request.

Proponents of the measure never offered any persuasive reason why the current three-day rule is a problem. This legislation died on the House floor.

The most talked-about legislation regarding FOIA exemptions on this humble blog this session was Senate Bill 373. This legislation would’ve created a large new exemption for government attorney-client communications and work product.

This legislation passed the Senate, was modified slightly and then passed by the House, and then passed a Senate committee again — before finally getting killed on the Senate floor. Like HB 1622, SB 373 was attempting to fix a problem that didn’t exist. Government attorneys couldn’t cite one instance in the last two years when they’d been asked by opposing counsel, to their detriment, to hand over documents via FOIA requests relating to legal strategies.

Robert Steinbuch, a law professor at UALR and a FOIA expert, said in an interview about SB 373’s failure:

SB 373’s defeat shows that the Arkansas legislature still wants to uphold the government transparency measures that were forged fifty years ago by Governor Rockefeller and that are still supported by the vast majority of Arkansans. I was proud to work with Lt. Governor Tim Griffin and the Advance Arkansas Institute to protect open government. Our efforts blocked taxpayer-funded, government lobbyists from doing irreparable harm to one of the best Freedom of Information Acts in the nation.

Arkansas legislators have many things to do if they want the Natural State to become a freer and more prosperous state. Arkansans’ use of the FOIA to access information about the actions of government bureaucrats isn’t something legislators should see as a problem. We hope the advocates of a weaker and less effective FOIA admit defeat and move on to other issues.

Note: HB 1622 didn’t fail in committee. It failed on the House floor. This post has been updated.