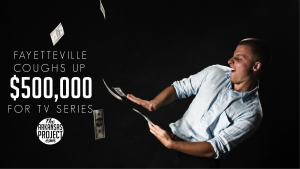 The city of Fayetteville plans to pay an unnamed television production company $500,000 if the company’s series is filmed in that city.

The Fayetteville City Council voted unanimously last night to pass a resolution of intent to provide the funds, so long as the company decides to film in Fayetteville.

Chris Crane, Arkansas Film Commissioner (and candidate for Pulaski County Clerk), told the council at last night’s meeting that Arkansas was currently competing with one other state for the project.

This project needs Arkansas. It needs Northwest Arkansas because of its topography and aesthetic beauty.

It looks like it needs a sizeable amount of Arkansas’s tax dollars as well.

Crane said the series would be filmed by “one of the preeminent production companies in the world” and estimated they’d be spending $70 million “in the community.”
The company would also qualify for state tax rebates of 20 percent on goods and services and 30 percent for full-time hires of Arkansas residents.

When you’re talking about the state’s commitment, we’re 100 percent committed. We are in competition with another state. We have a little bit to make up. We want Fayetteville to help with this, because we have a huge investment on the state part that we are putting forward with this.

The specific television series wasn’t named due to a non-disclosure agreement, but the only major television series mentioned in the news recently in connection with Northwest Arkansas was HBO’s True Detective.

Ultimately, I think it would be cool if a “True Detective” season as good as the first season is filmed in Arkansas. However, if Arkansas is featured in a season as terrible as the second season, we should just go ahead and let this other state have the project.

In all seriousness, these kinds of film projects are never a sure deal. Multiple states have considered ending their film tax credit programs in recent years. In part, that’s because these states are all too familiar with the phenomenon of the “winner’s curse,” where the winning bidder’s cost exceeds the project’s actual value to taxpayers.

That’s why the Advance Arkansas Institute (AAI) published a policy paper in 2015 which argues that “there is little or no reason to believe that such subsidies are truly worth the expenditure of the millions of taxpayer dollars they require.”
From Marc Kilmer’s AAI paper:

Film subsidies are a costly way to grow a state’s economy. They give money to production companies, diverting it away from funding core functions of government. Experts in many other states have realized the folly of film subsidies. Arkansas policymakers should consider both the costs and benefits of its film subsidies, and ask themselves what evidence there is that this is a program that is worth retaining. More generally, policymakers who want to encourage economic development should discard wasteful taxpayer-funded subsidies – and they should use the extra money in the state treasury that junking such subsidies would create to establish lower tax rates, which would attract jobs and capital investment to Arkansas.

It’s troubling that the state of Arkansas is now trying to get city budgets on the hook for six-figure film investments, rather than reconsidering the efficacy of such giveaways of taxpayer dollars.