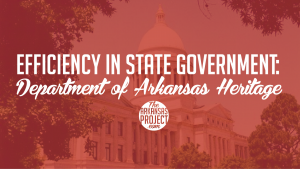 The Hutchinson era has seen many Arkansas state agencies adopt efficiency as a priority.

Nowhere is this more evident than in the Department of Arkansas Heritage (DAH).

DAH was created as a state agency in 1975 to preserve and promote Arkansas’s natural and cultural heritage.

Stacy Hurst, DAH Director, told The Arkansas Project how she went about eliminating inefficiencies in the department while still meeting DAH’s service requirements since she took over in 2015.

Hurst said one of the first actions she took after starting at DAH in January 2015 was to work with the Office of Personnel Management in the Department of Finance and Administration to get an analysis of staffing levels in the department.

The department was authorized for 177 full-time positions and 88 part-time position in 2015, according to Hurst. The inventory in 2015 revealed that the 2015 staffing levels were heavy on administrative support.

DAH reduced full-time staff by eight positions from vacancies from attrition for fiscal year 2017. This reduction amounted to an annual savings of $312,694.

I encourage our staff to work as efficiently as possible. When a position is vacated, many times duties can be absorbed by other current staffers. After a period of time if it becomes clear that we are not able to cover those responsibilities, we have the capability to open a position.

Hurst said the department currently has openings for 22 full-time positions and are “actively working” to fill six of those positions. The other sixteen open positions are currently being reviewed internally or by the Office of Personnel Management.

Part-time positions have been reduced even more than full-time. Hurst said the department previously had 88 part-time positions authorized, but she has reduced that amount to 69 for fiscal year 2018. She estimates the total savings from this reduction to be $233,000.

Hurst said her goal for DAH is for it to be efficient and effective.

As an outward facing agency, we have many stakeholders and consumers that keep us accountable. We’re always keeping an eye on our mission and our responsibilities under state and federal law, knowing that our efficiency efforts cannot negatively impact our delivery of services. That said, we also understand our serious responsibility to be good stewards of taxpayer dollars, so an efficient and effective operation is the goal.

This article is the first in a series of posts about government efficiencies implemented in Arkansas state agencies in recent years that have saved taxpayer dollars.

2 thoughts on “Efficiency in State Government: Department Of Arkansas Heritage”