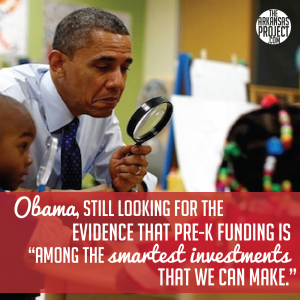 The federal government is giving Arkansas $60 million to bolster the state’s pre-kindergarten program. Sounds good, right? Who can be against pre-K? Well, you can always count on The Arkansas Project to take a contrarian view.
To be clear, I’m not against pre-K. My wife and I sent our daughter to pre-K (although at a private school, not one funded with tax dollars). However, one can be in favor of early childhood education and still be skeptical whether this federal grant will do much good.
One supporter of this funding claims that “The studies have shown, the earlier you can provide this access to education to children, the better their outcomes are.”
Actually, the studies don’t really show that. David Armour of George Mason University has analyzed the major evaluations of preschool education. Here’s what he concluded: “The most methodologically rigorous evaluations find that the academic benefits of preschool programs are quite modest, and these gains fade after children enter elementary school.”
Armour notes that some pre-K programs have proven successful, but that it’s difficult to extrapolate these results for other pre-K programs:

Two “high-quality” programs have been evaluated using a rigorous experimental design, and have been shown to have significant academic and social benefits, including long-term benefits. These are the Abecedarian and Perry Preschool programs. However, using these two studies as the basis for policy is problematic for several reasons: the groups studied were very small, they came from single communities several decades ago, and both programs were far more intensive than the programs being contemplated today.

Neil McCluskey of the Cato Institute explains why government-funded pre-K is probably doomed to be mediocre:

Government can’t make providers furnish “high quality.” Unlike the accountability that comes when customers use their own money to pay for a service, government provision often ends up working for service providers, not supposed beneficiaries. It is the providers who get the most direct benefit — a livelihood — from pre-K programs, so they are the most involved in pre-K politics. And like anyone, their natural incentive is not to be held accountable for their performance.

I’m all in favor of cramming kids’ heads full of knowledge. I’d love to see more children enter school better prepared. However, we shouldn’t expect this $60 million in federal money to accomplish the goals that advocates think it will. Alas, pre-K funding is far from being “among the smartest investments that we can make,” despite President Obama’s assurances.

2 thoughts on “Don’t Believe the Hype about Pre-K”