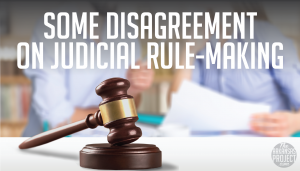 If you are a faithful reader of TAP, you noticed our recent series of posts containing a 2017 interview that Dan Greenberg, then-president of the Advance Arkansas Institute, conducted with Professor Howard Brill of the University of Arkansas School of Law. This was a lengthy interview, but I hope you found it informative.

Readers of this blog also know that the issue of tort reform is near and dear to our hearts. With that in mind, an aspect of the Brill discussion that I found especially interesting was near the end, where Brill outlines his view on judicial rule-making. Speaking of the SJR 8, the tort reform amendment, he said, “I’m particularly concerned, though, about the role that a legislative body would play in drafting rules of procedure.” Greenberg pointed out that “things were a little bit different before Amendment 80, and that the legislature was participating in the rules of evidence prior to Amendment 80 in a way that it does not and cannot now.”
While Brill says that today’s situation – where the Arkansas Supreme Court has sole power to determine its rules of evidence and procedure – “works well,” he never gives an opinion on whether it wasn’t working well in the pre-Amendment 80 days.

Brill did express that he likes the current situation where the Supreme Court has a committee process and takes public comments in order to shape these rules. “I think,” said Brill, “that process – the committees, the different input, the public, the deliberate consideration by the Supreme Court – is a very helpful and necessary product to adopt rules of procedure and rules of evidence. So, I think the way the committees have worked since 1977 or so in drafting these rules has worked very well.”
This process may indeed be a good one. However, the committee process also exists in the legislature. In fact, it is a key part of legislators’ lives. If this is the type of process that produces good rules, it does not necessarily need to be conducted solely by the Supreme Court.

The issue of whether today’s situation — a judicial monopoly on rulemaking — is better than a situation where the legislature plays a role is vital to the debate over SJR 9. Granting courts sole rulemaking authority can lead to a situation where the courts block the exercise of legislative powers by legislators. Greenberg wrote a blog post where he explored this issue in detail. He noted that there are cases in Arkansas where courts used their power over rulemaking as a way to encroach on public policy that should property be decided by legislators and the governor:

The state Supreme Court, after the passage of Amendment 80 in 2000, has continued to adopt an aggressive interpretation of its own powers. In 2007, the state Supreme Court struck down the legislature’s medical malpractice reforms as unconstitutional, because it found that the procedure that the legislature had enacted was disallowed. In 2009, the state Supreme Court struck down a procedure that the legislature had proposed to determine fault for parties who were not represented in court; in 2012, the Court struck down new rules for the admission of evidence in medical malpractice cases, because – once again – this was a power that the Court said the legislature should not exercise. All of these issues can reasonably be understood as issues of public policy; where we have courts determining issues of public policy, we have a collapse of the separation of powers. Those who feel that there is room for improvement in our justice system should note that the Court’s interpretation of Amendment 80 makes it difficult or impossible for the legislature to pass legal reforms (such as, for instance, loser-pays reforms) that would reduce the costs or increase the efficiencies of the legal process.

While I found Brill’s interview illuminating and agreed with him on many issues, I find his support of the Supreme Court’s monopoly on rulemaking powers lacking. There needs to be checks-and-balances between the three branches of government. It seems to me that the current situation leads to judicial encroachment upon the legislative branch. Support of the current system should rely on a stronger argument that it is “working well” because Brill likes the Court’s exercise of monopoly power.