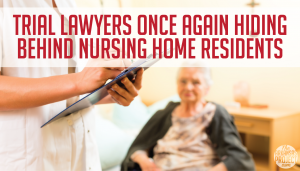 Nursing home residents deserve to be treated well. They deserve to live in dignity and have the best care that money can buy. I don’t think anyone disagrees with these ideas.

In the debate over the proposed tort-reform amendment SJR 8, however, trial lawyers seem to think that they alone care about nursing home residents. At least, that is the impression I got while reading a recent op-ed by Mike Masterson in the Democrat-Gazette. He slams the quality of nursing homes in Arkansas and puts forth the noble trial lawyer as the only way to save residents who are, in his telling, being victimized left and right.

Martha Deaver, who heads Arkansas Advocates for Nursing Home Residents, reports state inspectors have cited our nursing homes more times than those in Louisiana, New Mexico and Oklahoma combined over the past five years. For instance, over 20 percent of our state’s homes have been dinged each year, compared with an average of 5 percent in those states. As with many mistakes, medication errors often are deadly serious.

Clearly, we need lawyers to sue and sue some more to correct these injustices, right?
Not so fast.

Arkansas has no cap on non-economic damages. It could be argued that Arkansas has statutes that are far friendlier to plaintiffs’ attorneys than these states. If it is so essential that voters reject a cap on non-economic damages because Arkansas nursing home are so horrible (as implied by Masterson), then why are nursing homes in states with such caps being cited less than Arkansas institutions? Clearly something else is going on.

What may be occurring is the fact that nursing home lawsuits do not appear to have any effect on nursing home quality. That is something I have written about on this blog previously:

… there is little difference in the chances of being sued if a nursing home offered quality care or substandard care. Lawsuits under our system appear to be like hurricanes, earthquakes, or other natural disasters — they inflict themselves on businesses in a manner that is essentially unrelated to how appropriately the business is running its affairs.

When nursing home residents are victimized by nursing home employees, they should have access to the court system. Nothing in SJR 8 would stop them from doing this. This measure preserves the ability of juries to impose punitive awards that punish wrongdoing by nursing homes. All that SJR 8 does is put reasonable caps on non-economic damages, just as exist in other states. As the experience of these other states show, the ability to sue for sky-high non-economic damages is not necessary in order to ensure that nursing homes are run well.

While uncapped non-economic damages have nothing to do with nursing home quality, they have a lot to do with how much money trial lawyers receive. Nursing home residents are more sympathetic than lawyers, however. That is why you’ll see these lawyers trying to make this debate about nursing homes and not law firms. It’s a clever strategy, that’s for sure, but it’s one that falls apart under close inspection. Arkansas voters should not be fooled by this type of electoral misdirection.